Digital Altitude, Now MOBE, Who is FTC's Next Target...?
6 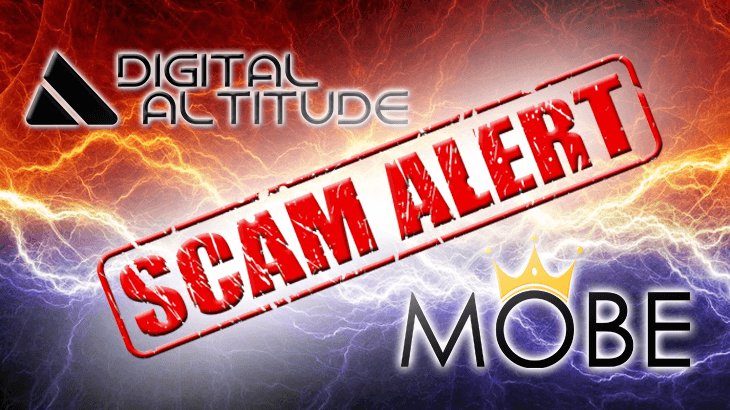 Digital Altitude, Now MOBE, Who is FTC’s Next Target…?

For those of you in the internet marketing industry, you probably know that Digital Altitude was shut down by Federal Trade Commission (FTC) in the beginning of 2018. (Source: FTC)

Just recently (June 2018), MOBE (My Own Business Education), a very similar company was halt by FTC and they should be shut down anytime soon. (Source: FTC)

Ironically, there were quite a number of people praising these companies and criticizing Wealthy Affiliate.

MOBE had even sued Wealthy Affiliate before... Pretty ridiculous, right?

In this post, I'll be revealing to you the real truths behind all these programs and why are they being shut down while Wealthy Affiliate is still standing tall and strong!

I'll also be making some predictions on my own regarding what are the programs that are at risk of being shutting down so that you know exactly what to stay away from...

The Truths About Digital Altitude & MOBE!

I've reviewed hundreds of digital products online, including both scams and legit products.

So I know exactly what YOU should look out for.

For Digital Altitude and MOBE, they both share a very similar business model...

Yet, the only way for you to make money is by recruiting more people into the system.

In order for you to qualify for commissions, you have to personally spend thousands of dollars to acquire the membership level yourself first. If not, the commission will be going to someone else who has paid.

If you're experienced enough, you'll realize that this is very similar to a Pyramid Scheme. Pyramid Scheme is a business model where the only way to make money is by recruiting people and there's no real product or services being transacted.

However, they're not outright pyramid scheme because they managed to get by with their so-called "top notch training".

Each of them has their own training which they claim to teach people about internet marketing and how to make thousands of dollars online.

In reality, those training are just focusing on teaching you how to drive traffic and "recruit" people into their program.

As you can see by now, such fraudulent system is what resulted these companies in their situation today - being halt or even shut down by FTC.

What annoyed me the most is that the owners of these companies can still possible live a good life despite their company being shut down.

But the victims are still those innocent people trying to make a living online!

Okay, so you should know by now that I'm an affiliate of Wealthy Affiliate. And I'm promoting their membership.

Some of you may be triggered by the fact that this is another WA member's website trashing other programs to promote WA.

I understand that this is the #1 Complaint against Wealthy Affiliate.

But I must say there are some misconceptions about this...

But just take a look at my website, especially all my product reviews, and answer yourself honestly, "Is this guy really just trashing other products to promote WA?"

If you think WA members are biased, why not reflect upon yourself. Are you really unbiased at all?

So, please put aside your limiting belief towards WA and examine my website thoroughly. You'll see that most of the WA members are actually doing a favor for these innocent people to avoid scams, just like the case for Digital Altitude and MOBE.

I understand there are inexperienced WA members who trash other products just to promote WA. I know they exist so I apologize to you for them because they are also learning.

It's time for you to take off your colored glasses when you look at Wealthy Affiliate.

There's a reason why FTC shuts down DA & MOBE instead of WA. There's also a reason why MOBE sued WA before, yet they're the one being investigated by FTC now.

I must say I'm proud to be a Wealthy Affiliate member. I'm not mad at people who criticize WA because I know they are just misinformed. With the right information, they'll be able to make the right decisions for themselves.

There are many reasons why Wealthy Affiliate is still so strong until today after being in business for more than 12 years.

Below are the 2 main reasons:

Unfortunately, these are also the exact reason that cause DA and MOBE to suffer today.

Can you start to see why I promote Wealthy Affiliate?

Making money for myself is NOT the only reason. It's because the system is really good and I firmly believe it can help a lot more people than those scammy products.

Seriously, how can a program that costs a few thousand dollars help people who are currently struggling financially? That doesn't make sense.

Yet, programs like DA & MOBE are trying to hide these high-ticket products in the back-end trying to upsell you once you join them.

Programs At Risk of Being Shut Down...

Since I've reviewed so many digital products online, I know exactly what you should avoid and why.

I'm not doing this for promoting Wealthy Affiliate. I'm doing this to provide value to YOU, my readers.

Below is the list of programs that are extremely similar to Digital Altitude and MOBE:

Take Note! I'm not saying that these programs are scams. Only FTC has the right to officially call any program scam.

But I'm just providing you with the information about these programs. I'm warning you that they are all using very similar business model like DA & MOBE which has obviously gotten themselves into serious trouble.

Not only that, there are sales funnel created to promote some of these programs.

For example, Laptop Lifestyle System is a sales funnel created to promote MOBE.

Once again, I don't conclude anything without real evidence. I've personally reviewed all these programs and provided you with real proofs to justify my claims.

If you're interested or you don't agree with me, please feel free to visit any of my reviews I've linked above and let me know what's your opinion.

I guess my recommendation is pretty clear. I'm inviting you to take off your colored glasses, if you have, and give Wealthy Affiliate a shot!

Once again, I'm not here to trash other products just to promote WA. I'm here to provide VALUE for my readers and innocent people who need help.

You don't need any credit card info to sign up with WA.

I'll be there to guide you personally 🙂

What Is Zeonis? A Nonsense Boris Ponzi Scheme!

What Is Mido Finance? Another European Crypto Ponzi Scheme!

What Is ABA Marketing? Behold! Another Boris Ponzi!

Jerry is a young aspiring Internet Entrepreneur who started his online business at the age of 18. He is currently a Full-time Affiliate Marketer at Wealthy Affiliate, a community to help anyone start their own online business without prior experience. He actually achieved Financial Independence at the young age of 21. Read more about his story here!

Good news ! MOBE is shut down.

I attended their free introductory seminar. They said we did not need to sell, only asking people to click, they would do all the work .

At that time, I knew nothing about affiliate marketing.

On first day afternoon, they taught us how to borrow money to start a business. We could borrow from friends (script provided) ,credit card money.

Except for first day morning (they talked about rules for the seminar and some self introduction) and third day afternoon (how to outsource your work, eg. Fiverr). They talked about their program,top earning members, joining fees, this guy regret he did not pay much money at first to become a diamond member…

I was 99% sure it was not an ethical business.

Matt Lloyd claimed that the “secret” (affiliate marketing) was only shared with few people.

After the seminar, I searched on the Net, there were lots of information and affiliate programs. What a ‘secret’!

Other attendees (and I) wanted to start a business, but the program was exactly an investment. MOBE never talked about the ways to do business.

I was a bit unlucky-losing $497 and wasting 3 days’ time. I felt sorry for those who joined.

I’m really sorry to hear that you got scammed by MOBE. It’s a very costly lesson learnt. Thanks for sharing that with us though. Good they’ve been shut down 🙂

MOBE is a scam – I went to an event and the sales rep triggered an alarm. Their attitude was what made me suspicious. It did not cost me anything to attend the event. I got a copy of Matt Loyd’s book Limitless at the event. I had to hustle before the sales rep gave me a free copy. I also received a free copy by post so maybe I did pay for postage.

Glad you didn’t wasted money on that scam. Fortunately it’s been shut down now!

Hi Jerry,
Great article ! I was a MOBE person for about 2 months and #2500.00 poorer when I realized what was going on and moved on. You wouldn’t know how to get my money back would you ?
Anyway I found WA about 3 weeks ago and started the training and have my website up and running now with 5 pages and 4 blog post so far. Considering I have never did any thing like this before I think I am doing ok. I plan on starting Bootcamp training here any day now. Feel free to check out my website above and any advise would be appreciated.
Have a Great Day !
Robert

Awesome man! Glad you’re having good progress with Wealthy Affiliate. Whatever happened to MOBE is already over. MOBE has already been shut down. So, hope you’ve gotten over it and move on.

You can start Bootcamp course anytime but I would advise you to focus on your niche site first to prevent you from spreading yourself too thin.