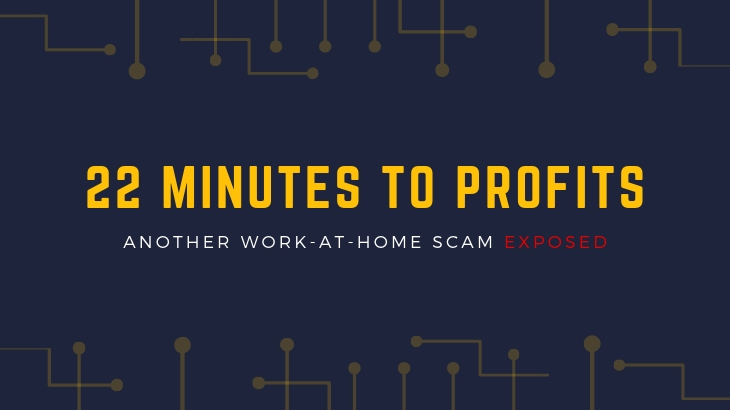 Is 22 Minutes To Profit a Scam? – It’s Another Work-At-Home Scam!

Welcome to my 22 Minutes To Profit review!

This program is just like any other scheme that I've reviewed, and from the looks of things, it's made from the exact template that previous scams used.

I am talking about 22 Minutes To Profit

Let me be completely transparent with you, I'm not associated with 22 Minutes To Profit in any form.

Instead, I'm here to reveal the inner workings of this scheme and why you should avoid this (and possibly 100's of variations more of this scheme). 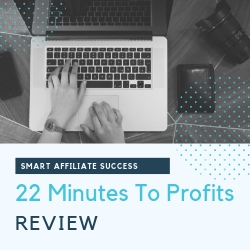 Summary:  22 Minutes To Profit presents itself as a work-at-home opportunity that tries to lure you in by giving these unrealistic claims of income without showing you how it's done. They then give you a false impression of success by providing you with fake testimonials from paid actors.  22 Minutes To Profit is nothing more than an outright scam and you'll get nothing out of this program.

What is 22 Minutes To Profit?

22 Minutes To Profit is another one of those “get rich overnight” schemes that’s propagating the market today.

And I’ve reviewed similar other products that promises to make you instant money without doing a lot of work.

If you’re someone who has no experience in the affiliate marketing or Internet Marketing industry, I can’t blame you if you’re going to fall for it.

This industry has a lot of nuances that most people just aren’t privy to, and this is what schemes like 22 Minutes To Profit take advantage of.

As you visit their landing page, you’ll see a sales video from its creator named Mark Stafford and he explains how his system can help you earn $300 to $500 per day. 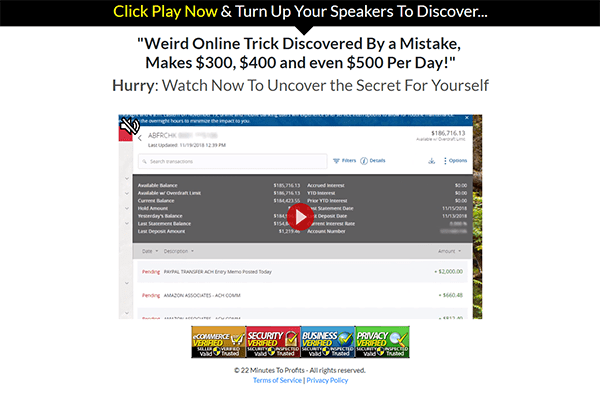 Along the video, you’ll also see a couple of testimonials shared by people who’ve allegedly used the system and in turn made huge sums of money.

But in order to continue to the next step, you’re going to be asked your full name and email address. If you provide them with this information, you’ll be taken to another sales video that hypes up your potential to earn a lot of money with their system.

As for the owner/creator, I couldn’t find any other information about Mark Stafford, apart from his name only being linked to this product.

The fact that they have an unexplainable method to getting rich and the fact that their owner is close to being non-existent are just two huge red flags for me.

Inside 22 Minutes To Profit

The idea behind 22 Minutes To Profit is that it gives you a “done-for-you system” through ready-made websites and products that you can sell to make money.

And I don’t see the logic as to how anyone can make money in just 22 minutes after creating an e-commerce website.

Don’t get me wrong. If you’re good with e-commerce and you can sell products really well, then you can make a lot of money online.

But to achieve the kind of success that 22 Minutes To Profits claims that it can give, you have to put in a lot of work.

I’m talking about being in front of your computer for more than 22 minutes and working on aspects of your e-commerce business such as traffic, marketing, product sourcing, and so on.

But 22 Minutes To Profit doesn’t really mention that you have to work hard to get paid a lot of money. Instead, they just continue to spoon-feed you these hyped up claims of getting rich in 22 minutes.

What Do You Get?

As far as I’m concerned, you’re getting ready-made websites, traffic resources, and other materials that 22 Minutes To Profit is using to make money online.

I breezed through the two videos and there was just no mention of anything else apart from their blueprints.

There are no training resources provided. There is no access to a private community.

How Do You Make Money With 22 Minutes To Profit?

In their videos, they did somewhat of a good job in explaining how their system works. This caught me by surprise because most of the schemes that I’ve reviewed never did this.

The products are mainly from Amazon where you’ll need to sign up for their affiliate program. Then you’ll get the affiliate links of these products and plug them into your website.

The program tells you where to plugin the links and then it just goes on from there.

22 Minutes To Profit takes on two different business models, and both of them are legitimate.

The first one being affiliate marketing, where you simply get affiliated with other people’s products and earn a commission every time you sell them.

The second one being dropshipping, where you establish an e-commerce site and fill it with products without worrying about inventory.

You’re partnered with wholesalers and distributors, who will do the fulfillment part of the model once customers have purchased from your site.

Dropshipping gives you full control over your profit margins, and when done right, you can make a ton of money.

Who's 22 Minutes To Profit For?

At this point in the review, you should’ve figured out by now that this program is not meant for anyone at all.

If you want to explore the dropshipping industry, here are some of the best resources to start with:

Both courses are expensive, but they’ll give you the best foundation possible for setting up an e-commerce business.

#1 – 22 Minutes To Profit Is Similar To Other Scams

What I am about to tell you is very important. The minute that I arrived on 22 Minutes To Profit landing page, I already suspected that it was a scam.

That’s because I’ve reviewed similar other scams that used the exact sales page.

One of which is Real Profits Online.

This program uses the same videos, and the same fake news article that 22 Minutes To Profit is using on their landing page.

Even if the system is 100% legit (which is not, by the way), the claims are just far too unrealistic.

I’ve been working with marketers for almost a decade now and one thing that I can tell you is that you’re not earning hundreds of dollars per day no matter how good you are. 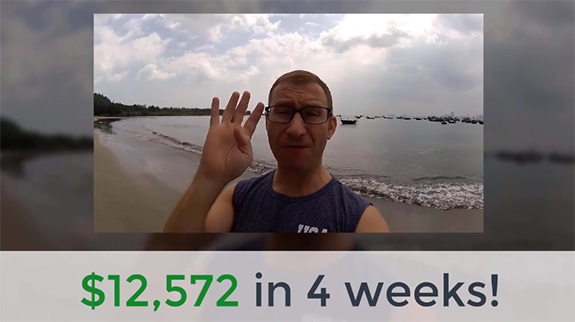 Throughout the video, they’ll keep on making claims that are just too unrealistic.

If you’re in the affiliate marketing or e-commerce industry, then you know that it takes a lot of hard work to get to at least achieving a decent income stream.

As I mentioned earlier, this depends on the sales page that you may have landed from.

But you might have encountered the same fake news on that sales page, where 22 Minutes To Profit claimed that it was featured on.

Throughout the video, they’ll keep on making claims that are just too unrealistic.

If you’re in the affiliate marketing or e-commerce industry, then you know that it takes a lot of hard work to get to at least achieving a decent income stream.

As I mentioned earlier, this depends on the sales page that you may have landed from.

But you might have encountered the same fake news on that sales page, where 22 Minutes To Profit claimed that it was featured on.

They even made use of the channel logos where they reportedly appeared.

But let’s be clear here. The news article or video that they’re bragging about makes no mention of 22 Minutes To Profit or anyone else.

It just covers the work-at-home phenomenon and how people are now enjoying its benefits.

The news articles and video coverage does not mention a single company at all.

If you watched the sales videos in its entirety like I did, then you’ll stumble across people who claimed to have succeeded using the system.

The funny thing about these people is that they’re also giving out testimonials for other programs too. 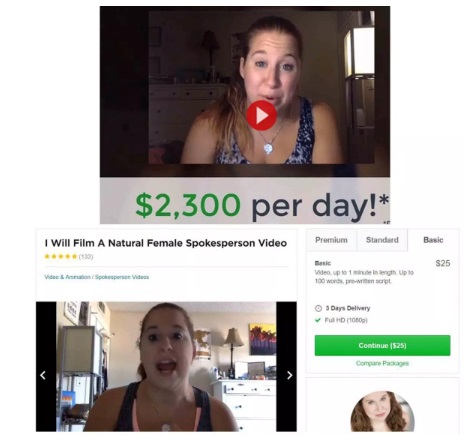 That is made possible because 22 Minutes Profits hires these actors from a site called Fiverr.

And these people were also exposed in the other schemes that I exposed too!

There’s nothing good that can come out of this program, and this is not meant to be shone under a positive light.

Is 22 Minutes To Profit a Scam?

22 Minutes To Profit has proven itself that it’s nothing more than a rehashed version of other scams that were reviewed by this site.

There’s the constant use of fake testimonials, fake news stories, and a story of a non-existent owner who’s found an exploit to making money online.

22 Minutes To Profit does not provide anything of value to anyone, except to its creators.

The moment the site is exposed enough times, the people behind it are just going to close the program, rebrand, and start over.