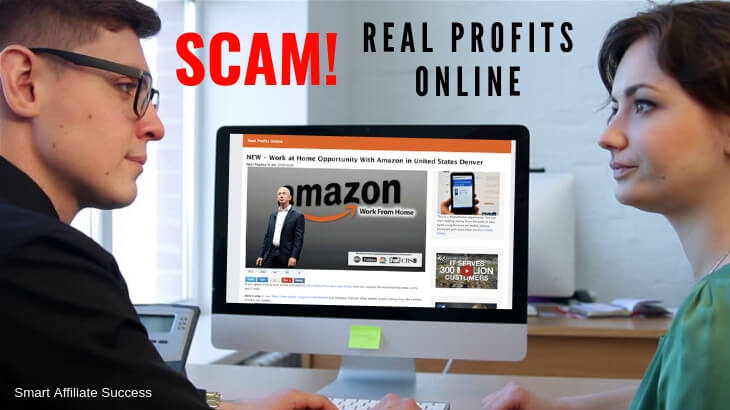 A friend of mine hit me up a couple of nights ago and told me that Amazon has a new "work at home" program that they released.

He told me that the system already had ready-made websites that could be launched immediately.

Skeptical, I asked for the name of the product and made this review.

You probably have the same story as well. Friend told you of an amazing "work at home" opportunity that could help you make hundreds of dollars per day.

I am talking about Real Profits Online.

Let me be completely transparent with you, I'm not associated with Real Profits Online in any form.

Instead, I'm here to reveal why this snake oil of a money-making program tries so hard to get your hard-earned money.

You'd be surprised to find what I have in my Real Profits Online Review.

Founder:  Mark - Obviously a fake name from a hired actor 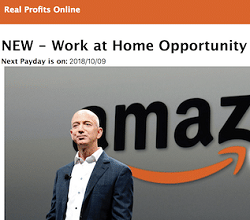 Summary:  Real Profits Online is a rehashed version of an old scam that circulated the Internet some time ago, and I'll show you what I mean in this article. The site tries so hard to sell itself that it ends up hiring actors to create these fake testimonials to goad people into buying the system, and I have the proof!

What is Real Profits Online?

Real Profits Online is an affiliate marketing platform (of sorts) that promises you and its customers (unsuspecting victims) with an effective system that you can use to start making money online.

Just by the description itself, I could already tell that something was really weird going on with the website. But I won’t spoil the fun.

So, back to the topic.

Once you visit the website, you’re greeted by their spokesperson named Mark. He claims to have created the system and wants to tell you about a “weird trick” for making money on Amazon.

He claims that he got this trick after watching what his friend Tim was doing on the computer.

Tim supposedly sat in front of the PC with mouse in one hand and a beer in the other. 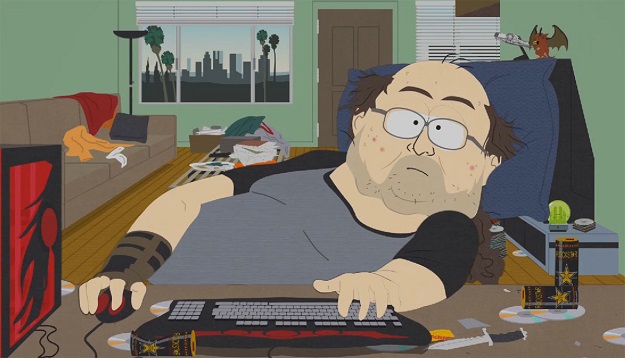 Tim showed him how he was making a full-time living using “done-for-you” websites, and Mark claims that Tim set-up a brand new one in front of him and showed him how to make money.

Mark takes this to the next level and decides to share it with others, and thus the Real Profits Online website was created.

The reason why I wrote this backstory was that it’s quite similar to other platforms such as Five Minute Profit Sites, Profit With Alex, and Home Income System.

So basically, you’re looking at another system that tries so hard to get your money without even giving you anything in return.

Truth be told, Mark (or whatever his name is) tells and shows you just what you want to hear and see. He tries to hype you up just so you can buy the system.

And I’ve reviewed a lot of these money-making systems that turned up to be no better than Real Profits Online:

And in the next few sections, I’ll reveal just how similar Real Profits Online is to these sites and more.

Real Profits Online starts out by luring you to a fake news article. This article is about a fake “work-at-home” job from Amazon. 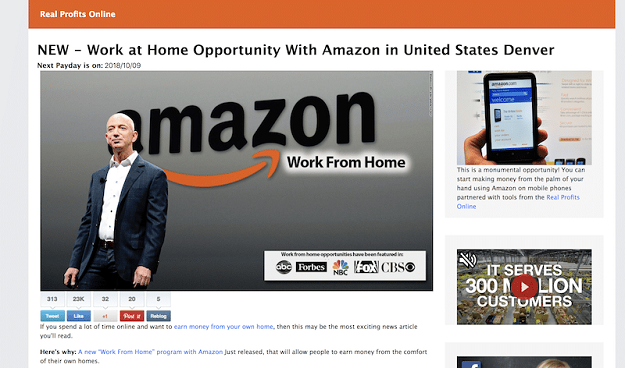 Here's the fake article on their fake homepage

As soon as you’re hooked, you’ll click through the next page and you’ll land on their “squeeze page”, which is designed to get your contact information.

This happens because if you don’t buy, they can repeatedly send you emails that will convince you to buy (or even sell your details to other marketers).

Other way, the landing page is not going to do you any good.

Anyway, if you do submit your contact information, you’ll be taken to their sales funnel, which contains another video that tries to sell you the program.

How Much Do They Want You To Pay?

To gain access into Mark’s money-making system, you’re going to pay a one-time fee of $47. He doesn’t even mention what you’re getting out of the $47.

This upsell, while optional, tries to convince you that you’ll earn 20x as much as opposed to just getting the $47 package.

You’ll have two more other upsells which will bring you to a total of $700. I know this because I clicked on their sales videos, and it took me to this YouTube channel:

What Are You Actually Buying Into?

If the story about Amazon was indeed true, then you could’ve been buying into a new program that would’ve helped you make money online.

But it’s not. So, what exactly is being sold to you by these snake oil salespeople?

You’re buying into an imaginary system that makes affiliate marketing look bad. You are told that you can make $500 per day without breaking a sweat through their system.

You can get their system for a small fee (and huge upsells). It sounds too good to be true, and what makes it even worse is that there are other people who’ll try to convince you that it’s real.

These people have provided video testimonials about their success using Real Profits Online. 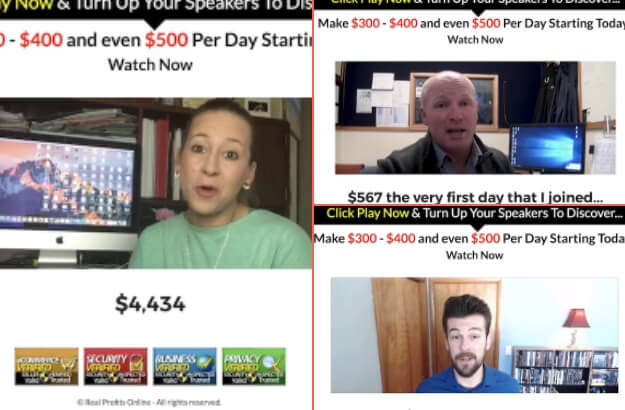 These video testimonials all claim that they’ve been making tons of money using the system, but I immediately recognized who they are.

And I’ll reveal who they are in the next few sections.

Who's Real Profits Online For?

No one. Absolutely no one.

This is a scam that tries so hard to really get your money, and I think that if people don’t do their research well enough, then they just might end up paying close to $800 for nothing.

#1 – Are The Testimonials Even Real? NOPE!

One thing that sucks a lot of people into systems like these are the testimonials on sites like Real Profits Online.

When you see a bunch of ordinary people turn their life around by using a money-making system, you just can’t help but assume that you’ll succeed too.

Which might be true to some extent, but I have sad news.

The testimonials you see on the Real Profits Online website are all fake, and I have proof.

So, here again is the screenshot of the testimonials:

I just chose these three random testimonials because they looked ODDLY FAMILIAR.

They’re all paid actors coming from a site called Fiverr, which is an outsourcing company for content (fake testimonials included). 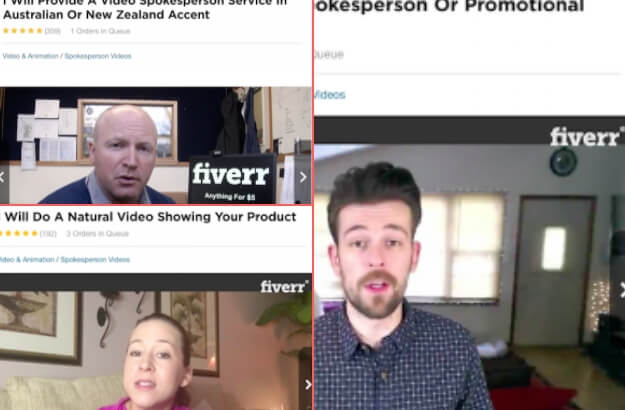 These are people pretending to have crushed the world of Internet Marketing and are now raking in the big bucks.

But that’s not really the case now, is it?

Like the people in the video testimonials, the system also looks eerily familiar to something that was also going around for a time.

The older version of this scam was called Amazon Cash Websites and this funneled people into a different scam.

You'll find out more about Amazon Cash Websites in my review.

Again, using the same system, it uses Amazon’s name (I’m surprised why they’re not sued yet) and promises instant income with their ready-made websites.

Both scams also make use of the same fake article to get people into the funnel too.

#3 – Systems Like These Give Affiliate Marketing A Bad Name

Let’s be honest, it’s systems like these that make people not want to pursue their goal of making money online.

In a parallel universe where this system is legit, this is a plain and simple way of getting started with affiliate marketing.

You get a website, you get products, and then you start the marketing in between.

But in reality, that’s just barely scratching the surface. A whole lot of work is still needed to get to where you want to be, and that’s to earn a steady stream of income online.

If you want to know the right way to make money online, check out my step-by-step guide on affiliate marketing.

I try to be honest, objective, and unbiased about all my reviews. Even if programs or systems are terrible, I still mention the things that makes them good, even if it’s inconsequential to the user experience.

But with Real Profits Online, there’s absolutely nothing positive worth noting simply because it’s an outright scam.

It would be downright unethical for me to convince you or anyone that there’s something good about this program.

Is Real Profits Online A Scam?

Yes, it definitely is a scam. It tries so hard to get your money that it just rehashes an old scam, rebrands, and then tries to sell it to unsuspecting novice marketers.

On top of that, you have a lot of people trying to convince you to get into the system by creating these fake testimonials on how they’re making it big time.

A system that’s being peddled by snake oil salespeople will not do anyone any good at all.

I think it is awesome that you promote Wealthy Affiliate and the way that you do it is very well customized. I was unaware that you could have your own sign up landing page. I know you can make a custom message, but how were you able to design the whole page. I have been working on my site for a while, and once I add some lead magnets and capture I was going to launch traffic. Maybe we could connect on Wealthy Affiliate? Or however is comfortable, would love some advice! Thanks! – Rod

Under “Links & Tracking”, you can create your own custom landing page.