Is Greedy Mentor a Scam? 5 Reasons Why It's NOT GOOD AT ALL!
0 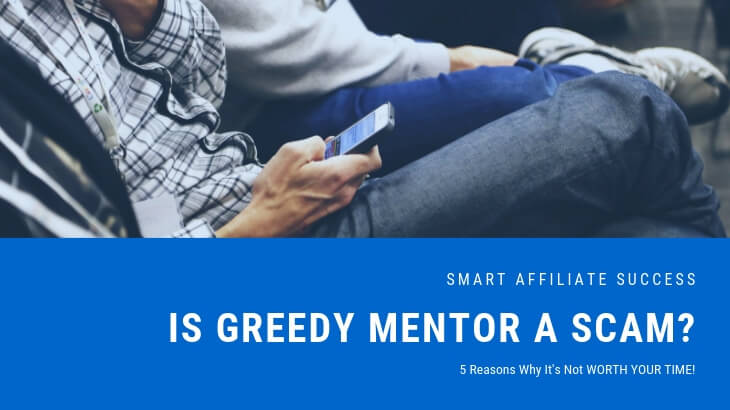 Is Greedy Mentor a Scam? Here’s 5 Reasons Why It’s NOT GOOD AT ALL!

Welcome to my Greedy Mentor review!

Let's go straight to the point.

There's nothing good or legitimate about this program at all, and there are several reasons that will help me prove just that.

So allow me to introduce to you Greedy Mentor!

Let me be completely transparent with you, I'm not associated with Greedy Mentor in any form.

Instead, I'm here to reveal what this program is all about and why it's anything but legal or positive! 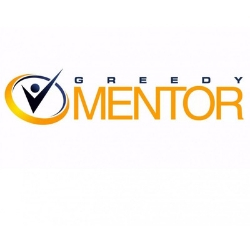 Summary:  Greedy Mentor is an abhorrent MMO (make money online) scheme because it doesn't provide anything of value to anyone at all. The only people making money here are the people running the program. And there are several red flags all over their landing page and sales video that make me think that this program is a scam. The biggest red flag there is that it's a rehashed or rebranded scam that uses the same sales video, same fake testimonials, and the same MO. I even have the proof that these scams are coming from one source.

What is Greedy Mentor?

Greedy Mentor is an online money-making system that promises you that you can make a lot of money from their program.

How much money you ask?

They repeat this number over and over again in their sales video, delivered by someone named Meaghan Harper.

She even goes out of her way to tell you to not share this system to anyone just yet because “it’s so powerful, she can’t unveil it to the public yet”.

The video is even advertised as private and confidential, and that alone seemed suspicious because the MO’s of these scams use the exact same reasoning as Meaghan Harper’s.

The only problem here is that Meaghan Harper, along with Greedy Mentor, doesn’t exist.

And I’ll tell you how and why that’s possible.

As mentioned earlier, Greedy Mentor is a “program” that’s going to help you a lot of money.

Quite frankly, it’s nothing more than a get-rich-quick scheme that tells you what you want to hear just to get you excited enough to spend money on their program.

And you shouldn’t trust everything that you read or watch on their site.

What’s The Program All About?

In this sales pitch, they’ll tell you that you can make a lot of money using their program.

They’ll keep repeating that you’ll earn thousands of dollars per day on their sales video, and that it’s only going to take a few minutes of your time every day.

The truth is, there is no program.

The sales video and the site don’t tell you how the program works, let alone how you’re actually making money.

It doesn’t say if you’re going to be doing dropshipping or doing affiliate marketing or e-commerce.

They don’t even have a list of other products and services to offer once you’re enrolled into the program.

There’s none of that.

Greedy Mentor is your typical scheme that preys on people who’re new and want to learn about the world of making money online.

Granted, you’ll have legitimate ways to be successful in earning a passive income, but Greedy Mentor doesn’t do any of this.

How Much Does It Cost?

The program will cost you a one-time payment of $67, at this time of writing. This is because it depends on what sales page you’ve accessed and if there’s a discount applied.

This is just the start because after you fork over the money (please don’t), you’ll be given other products to buy from Greedy Mentor.

These upsells are not related to Greedy Mentor and these are probably affiliate products of the actual owners of the company.

You’ll spend about hundreds of dollars to get the upsells, and you’ll basically get nothing out of them.

Who's Greedy Mentor For?

This program is not meant for anyone because it’s nothing but a ridiculous scam.

If you want to get into the world of affiliate marketing, check out my step-by-step guide by clicking on this link right here. It’s also totally LEGITIMATE and 100% FREE!

Greedy Mentor is nothing more than a repackaged and rebranded scam that uses the same MO.

And their sales video rats them out. 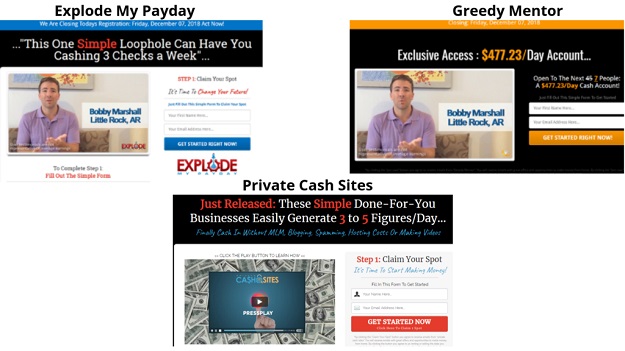 This scam also went by a different name such as Explode My Payday (also known as Digital Payday) and Your Freedom Mentor.

A quick search on Google about these two products right here will provide you with pages and pages of customers who told their awful experiences with these two.

#2 – They Admitted You’re Not Making Any Money!

Not even Greedy Mentor believes that you can make money using their product.

MMO (Make Money Online) systems, or at least the legitimate ones, won’t make claims or promises about the user’s financial success.

That’s understandable and it’s a good way of managing expectations that not everyone will succeed.

But Greedy Mentor is a different story because they directly contradict what their sales video says about making money.

And you’ll find that contradiction listed on their disclaimer, as seen below:

What that basically tells you is there’s no guarantee that you’re going to be earning money from the program and that there’s no way for you to blame Greedy Mentor about your failures.

#3 – They Are Allowed To Sell Your Data!

Greedy Mentor will be allowed to sell your data, like your name and email address because it says so in their consent form once you sign up for their program.

They can sell your data with this paragraph alone.

You can use fake details like a name and email address to check the program out, just like I did. But I was quite surprised to find that little snippet.

The reason why they put a small disclaimer like that is because Greedy Mentor will not be liable if your data ends up in a market research agency.

There’s no other spokesperson for Greedy Mentor other than Meaghan Harper.

There’s no information about the company running the program, or where the company is located.

But who exactly is Meaghan Harper? 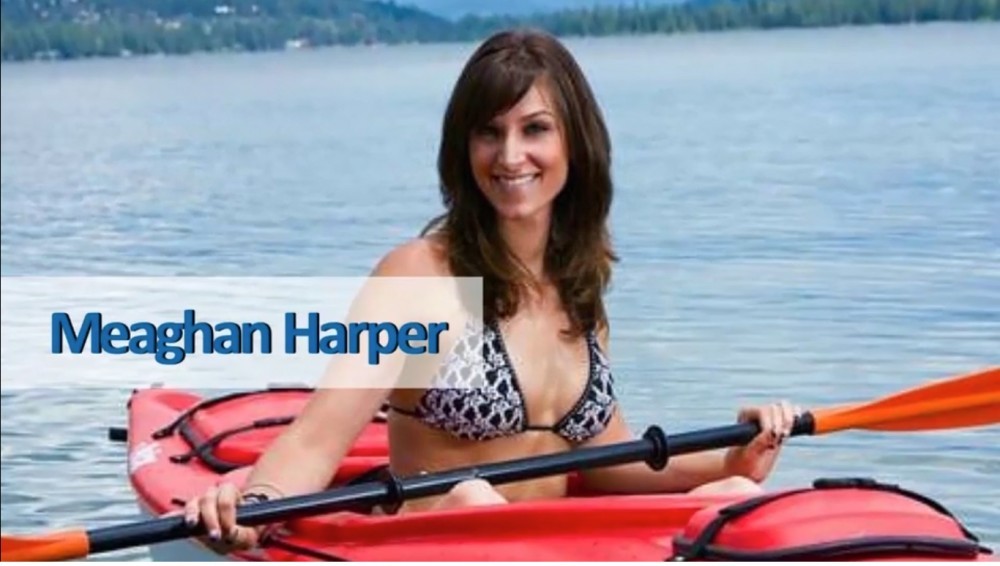 Who is Meghan Harper? 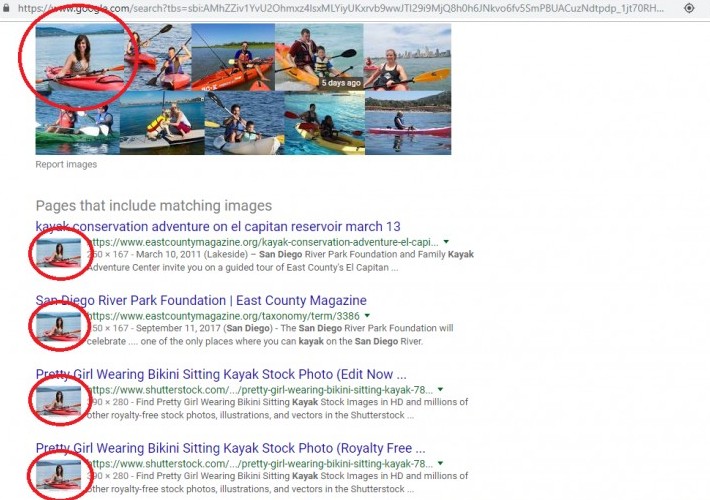 Well, she’s nothing more than a made-up person using a fake name and some stock photo of a woman in a kayak.

If you managed to watch the entire sales video like I did, then you’ll notice that there were video testimonials from people who said “they earned money from using this amazing system”.

If your gut told you that there’s something up with the videos, then you’d be right. 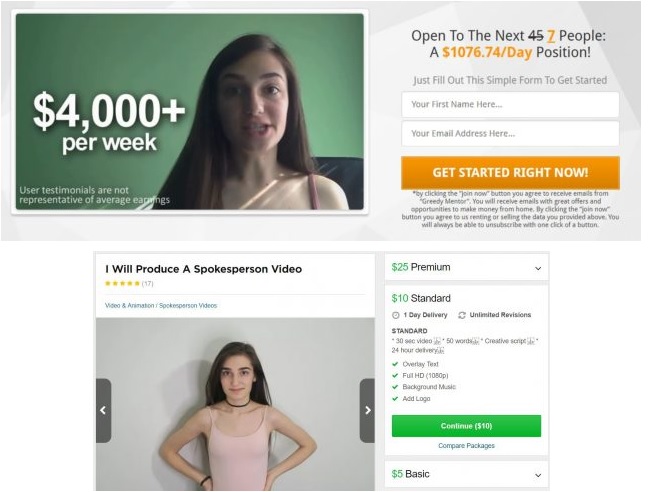 All testimonials are fake

Greedy Mentor doesn’t really provide you with authentic testimonials about their success because it doesn’t exist.

Instead, they got these paid actors and actresses from a site called Fiverr. Just pay $5 to that actor, hand over the script, and you’re done. 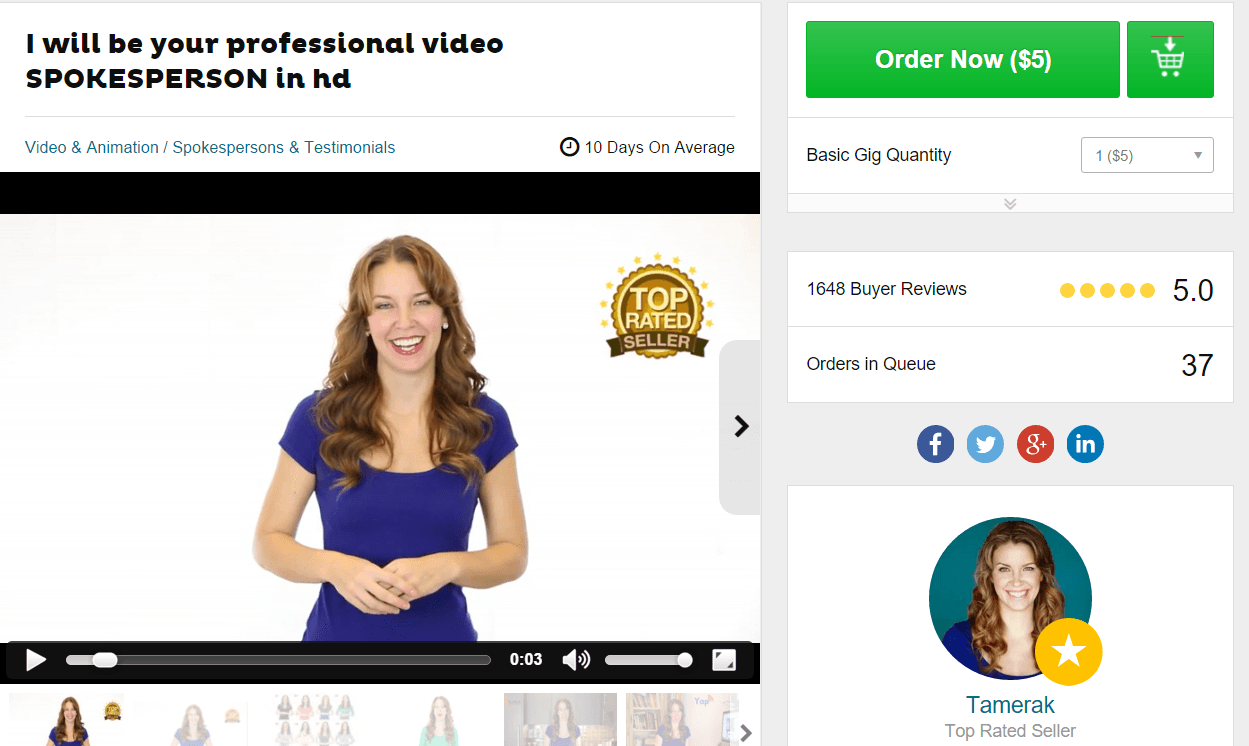 Just one of those Fiverr accounts

There’s no evidence that any of the testimonials are real or sincere.

There’s nothing that I like about Greedy Mentor because it’s an outright scam.

Is Greedy Mentor a Scam?

Greedy Mentor has several RED FLAGS that should tell you that it’s an outright scheme aimed to get your money and provide you with nothing.

But the biggest red flag that probably gave this site away is that it’s nothing more than a rehashed version of older scams using the same modus operandi.

This MO is simple and straightforward. They present you with a secret/exploit/loophole about making money online, and that only a handful of people (a.k.a. their company) has stumbled across it.

It’s so powerful that they don’t even want to share it to the entire public, except to a handful of people (that’s you).

From there, they’ll sell you the system by telling you how much money you’re making and how it’s all legitimate.

I can tell you that it’s all a load of BS.

They even admitted in their own legal disclaimer that you’re not going to make any money from their program, so they don’t even believe their own story.

How I Make a Living Online Scam?