Is Cash for Patriots a Scam? It's an Investment Newsletter But...
0 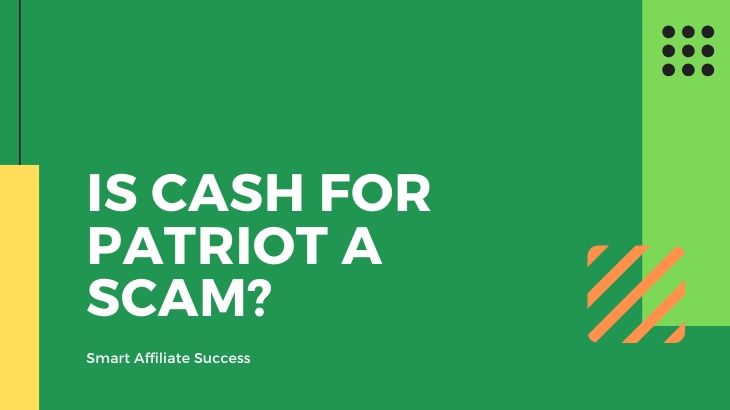 Is Cash for Patriots a Scam? It’s an Investment Newsletter But…

Welcome to my Cash for Patriots review!

This program has you thinking that you’re going to make money by taking advantage of the US government’s program.

Unfortunately, it’s not what we expected and we already reviewed a handful of them before.

Let me be completely transparent with you, I'm not associated with Cash for Patriots in any form.

Instead, I'm here to reveal why this program is not that hyped up to be and why it's somewhat misleading...

Best For:  People who want to take their investments and trading to a whole new level. 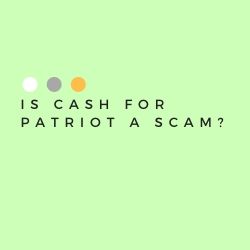 Summary:  Cash for Patriots is a legitimate newsletter from a reputable financial publication. But as much as its legitimate, we can't help but point out how misleading their sales pitches are. If they were a bit honest, this review would've went the other way.

What is Cash for Patriots?

Cash for Patriots is marketed as a program that was created by the US government which aims to provide American patriots with checks twice a month. 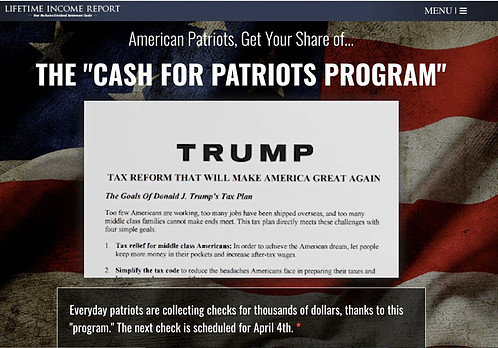 Is Cash for Patriots a Scam - Landing Page

This money is coming from a tax reform created by US President Donald Trump. The program claims that it gives out checks to Americans as high as $7,980.

The man behind Cash for Patriots is Zachary Scheidt, who is also the editor-in-chief for a financial newsletter published by Banyan Hill.

He provides advisories for investors to help them find the best yields as far as Wall Street is concerned.

Who Is Behind Cash For Patriots?

Scheidt is an editor for Agora Financial, published by Banyan Hill. Both programs have been reviewed by us. He graduated from Georgia State University with a MBA in Finance. 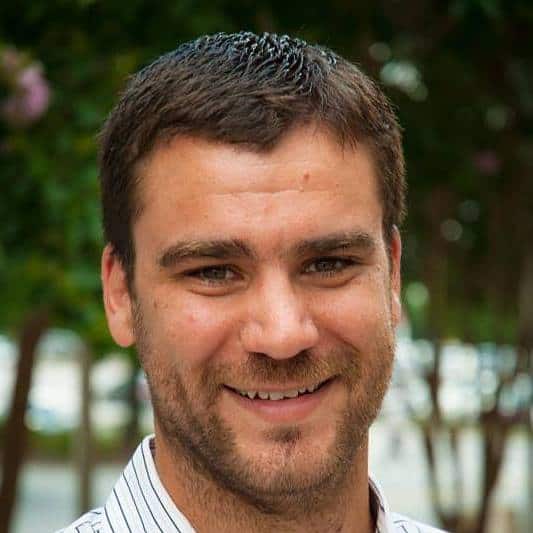 Is Cash for Patriots a Scam - Zachary Scheidt

He was a former hedge fund manager for Piedmond Investment Advisory where he learned and deployed various financial techniques that helped improve your cash flow. He also took advantage of tax shelters and social security loopholes.

He’s well-respected in the finance industry and is considered as one of the leading authorities for investments and other concerns.

Inside Cash for Patriots

Cash for Patriots is a newsletter of sorts that gives you time-tested tips and suggestions to help you manage your investment avenues in Wall Street and in other areas.

The tips and suggestions are made available in video and audio format.

One good thing that we noticed about Cash for Patriots is that anybody can take part in this program. It doesn’t matter if you have any background with trading or investment or not.

You see, the Cash for Patriots’ objective was to set aside some money and invest it in avenues that you could yield higher and better returns. If you follow the program closely, you’ll be able to receive a check every month.

Cash for Patriots is a lot similar to another program called Federal Rent Checks, which follows the same format and has the same pitch.

All you need to do is to sign up for Cash for Patriots and you’ll be shown how to make money.

Why Does Cash for Patriots Look Like a Scam?

Cash for Patriots is marketed as a government program that’s designed to give American patriots money twice a month through a tax reform created by the US President, Donald Trump.

You just need to enroll in the program and start receiving checks for $7,980 or higher, twice a month. The site doesn’t mention if it’s free to join or not.

However, they mentioned in their sales page that there will need to be some form of investment done to get your name on the Patriot List.

But as it turns out, this program actually comes for free when you sign up for Lifetime Income Report.

And we’ll go over these misleading details in the next section below.

At the end of the sales pitch, you’ll need to subscribe to a newsletter from Lifetime Income Report, which costs $49 a year. We also reviewed this program too.

Who's Cash for Patriots For?

However, don’t be fooled by their misleading sales tactics as we’ll go over them below.

Their sales page is quite misleading for a number of reasons. If you watch their sales video, you’ll find that the program is poorly explained and will make you think that the US government was behind this program.

The program is only created by Agora Financial and they only used government info (real ones) to make it sound legit.

One thing that they didn’t really tell you is that you have to sign up for another program to get Cash for Patriots. You’re actually being marketed Lifetime Income Report, and Cash for Patriots is merely a bonus report that comes with signing up for the program.

Unfortunately they don’t tell you this because they want to make you think that you’re going to join this program for free.

Lastly, their sales claims are quite misleading too. Take for example Bob, who’s made quite a hefty amount of money. On the video, he makes about $6,000 a month but it doesn’t really say how he does it.

Upon closer inspection, the money he earned came from investing in certain dividend-paying stocks of overseas American Businesses that enjoy particular tax breaks. 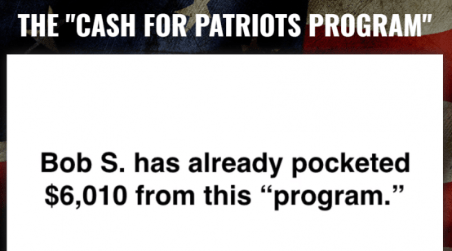 Bob didn’t get the money just by signing up or filling out a government form. He had to invest money to get $6,000.

But how much did he invest to get that amount every month? To get that amount, assuming that he had an elevated dividend payment of 5%, Bob would’ve had to invest $120,000 for that year.

But if he was earning that much in a month based on returns, then his investment would be $1.5M at most.

There’s nothing that I like about Cash for Patriots. I’m not even sure if it’s an independent program. The only information I could find about it comes from Agora Financial, so it could be as legit as it can get.

Is Cash for Patriots a Scam?

Cash for Patriots is a legitimate investment product as far as we’re concerned, but we’re disappointed with how things were presented.

There were a lot of misleading information posted on their sales page, which is why you can’t really trust this program until you review the details first.

It doesn’t really help that they posted misleading sales claims to make you think that people are earning money just by signing up too.