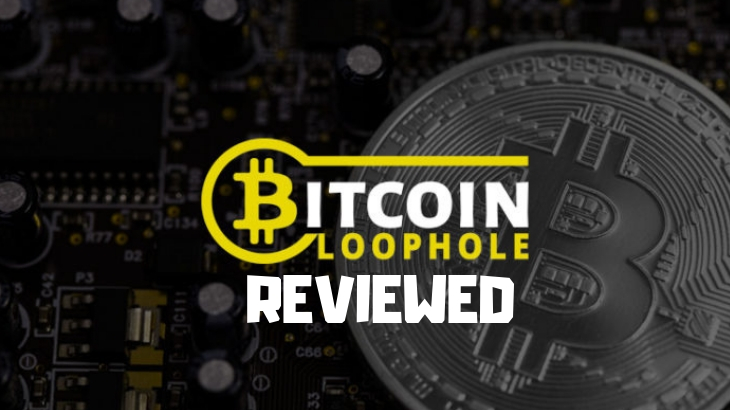 Welcome to my Bitcoin Loophole review!

I am not going to write any witty introduction here, so I'll just cut to the chase.

This looked like a promising program that could help you make a lot of money, but you'd be surprised to find out what they're hiding.

This is Bitcoin Loophole.

Let me be completely transparent with you, I'm not associated with Bitcoin Loophole in any form.

Instead, I'm here to reveal what this trading platform is all about and unveil their reputation to the rest of the world. 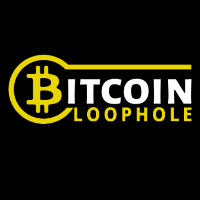 Summary:  Bitcoin Loophole is a cryptocurrency trading platform developed by former software developer Steve McKay. Featuring both an auto-pilot and manual mode for trading, this is supposedly intended for both beginners and expert traders alike. However, there were a few things that I found out that turned this review around. People didn't get paid (and I'll show you proof) and they used fake advertisements from a popular TV show and a well-known entrepreneur (to be revealed in this article) as well.

What is Bitcoin Loophole?

He believes that users can achieve excellent trading and investment results from day one using his software, and that a lot of users can attest to his claims.

There’s not a lot of information available for Steve McKay. In the videos, he tells us that he used to be a former software developer and turned into an investor after creating Bitcoin Loophole.

Not much is known for his investment success stories either since the only time he shows up on anyone’s radar is when they search for Bitcoin Loophole.

And I find this bit to be a little bit suspicious.

Bitcoin Loophole is a cryptocurrency trading platform, and one of its biggest merits is that the system uses the latest technology in trading.

The crypto-robot is made for both beginners and experts alike in terms of settings and interface.

How to Use This Cryptocurrency Robot?

The system works with the biggest cryptocurrencies in the industry, so it works with Bitcoin, Ethereum, Ripple, and so on.

The amount of information plugged into the system is so huge that it leaves no room for mistakes.

The moment the robot becomes active, it scans for information in real time in milliseconds and constantly updates with the latest industry developments around the world.

This makes it possible to get the most correct forecasts.

Once proper analysis has been done, the software generates trading signals that can be used in two ways:

This is the auto-trading feature of the robot that places investments according to the analysis the software made. This is recommended for complete novices who’ve yet to make their first steps in the industry.

This mode is intended for the more experienced traders that do their own research analysis. The forecast made the by the software are still presented to them so they can choose to do what they want to do with the information.

Both modes provide traders with the ability to determine the trade volume, invested amount, and the risk level for their trading experience.

The software is said to have been proven reliable and operates efficiently.

The Bitcoin Loophole software is free to use by anyone.

As strange as that may sound, people can get access to this sophisticated software without paying a membership or monthly fee.

However there is a limit to the number of free spots you can apply for because Mr. McKay and his team tries to provide you with the best service possible.

Acquiring a license can be done in three steps:

Your initial deposit will also serve as your private capital for trading, so the usage and its movements are all dependent on you and your decisions to trade, fund, and withdraw.

Who's Bitcoin Loophole For?

Sadly, there were some feedback on the Internet that I’ve read that makes me think that this platform is not meant for anyone.

And I’ll explain them all in the next few sections below.

If you are looking for a legitimate trading platform, I would suggest looking at 24Option and IQOPtion.

Apparently, Bitcoin Loophole is being promoted via fake news advertisements in relation to one of Dragon’s Den cast members.

Here’s the advertisement that’s been making the rounds.

Dragon’s Den is the British version of the popular TV show Shark Tank, where entrepreneurs try to win a partnership or investment from well-known businessmen and women.

It just so happens that Peter Jones, one of Dragon’s Den’s investors, was the person used in this fake endorsement.

In the Tweet below, someone had told him about the endorsement and is now pursuing legal actions against Bitcoin Loophole. 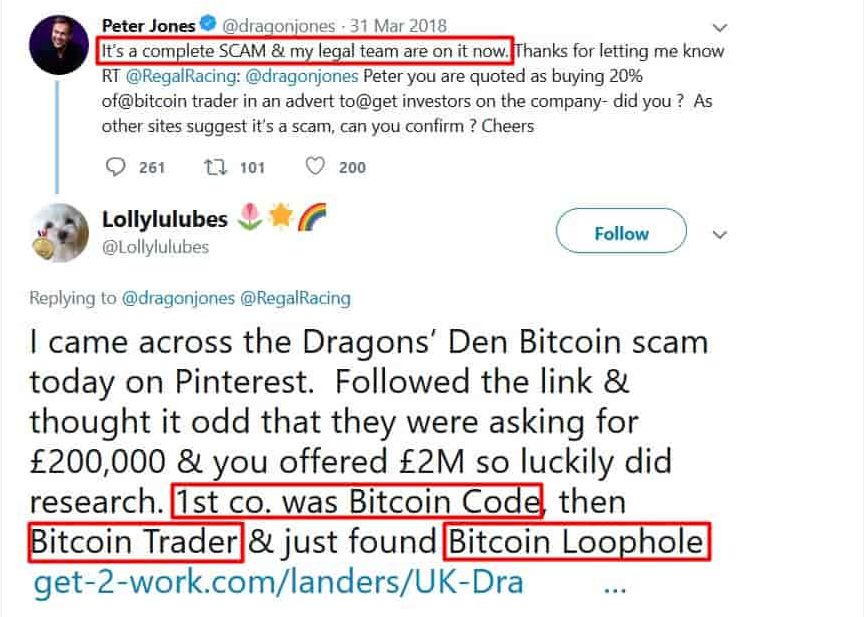 Another cast member, Deborah Meaden, was also used as a clickbait for one of Bitcoin Loophole’s ads.

This type of advertising is very misleading and is frowned upon given that this is only done by people who’re out to scam other people.

#2 – People Actually Got Scammed By The System

Apparently, the software did make some decent trades, but I wish I could say the same thing for its traders.

I’ve read a lot of feedback from people who reportedly got scammed by Bitcoin Loophole, and I had to make sure that these were not fake.

Check these out and see for yourself.

He got scammed too 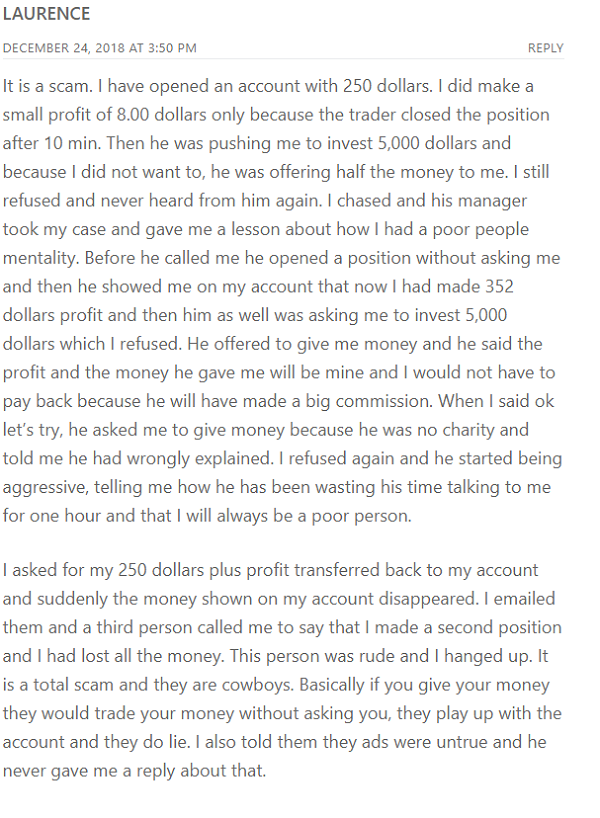 Based on what I’ve read, people deposited a lot of money into the system and somehow couldn’t withdraw all of their profits or even take their initial capital back.

And that’s not all. There’s also reports of these people not being able to get a solid answer from Bitcoin Loophole about their situation.

Ever wondered I stayed away from doing Forex trading and investment? It’s because I know that it’s risky.

Sure there are platforms out there that could make my trading experience easy, but I have ZERO background on trading stocks and currencies.

This makes it a lot riskier for me to do trades compared to experienced traders.

With that said, cryptocurrency trading bears the same risk with Forex trading simply because you can go big or go home.

This is a volatile market where prices can go up or go down faster than you can type in CRYPTOCURRENCY on your keyboard.

At this time of writing, I don’t think there’s anything positive worth mentioning about Bitcoin Loophole that could outweigh the negatives that I just listed.

Is Bitcoin Loophole a Scam?

I am quite disappointed with how this review turned out, and I was expecting to write a positive one.

Having found out that people got scammed and that they have used fake advertisements using prominent entrepreneurs, I don’t think that this program is worth anyone’s time and money at all.

There are far more superior and more legitimate trading platforms out there on the Internet.

Is the program a scam? I don’t have enough evidence to say that they are, but I would say that they’re up to something.