What Is Dacxi? It's Another OneCoin Ponzi Scheme Clone?!
0 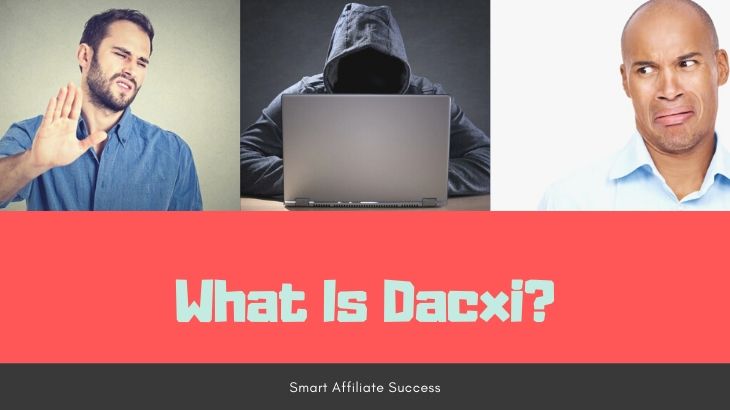 What Is Dacxi? It’s Another OneCoin Ponzi Scheme Clone?!

Welcome to my Dacxi review!

The thing about a Ponzi scheme that’s been caught is that its followers, promoters, and its management team will always find a way to spread out and rebrand the product.

This makes it difficult to really put a stop to one Ponzi scheme. Then there’s the fact that they’ll also get new promoters and followers, so they spread out even further.

Today, we’re taking a look at a possible clone of a previously caught Ponzi scheme. This is Dacxi.

Let me be completely transparent with you, I'm not associated with Dacxi in any form.

Instead, I'm here to reveal what makes this a Ponzi scheme and why we think it's a OneCoin clone. 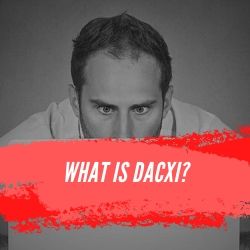 Summary:  Dacxi is an investment MLM company that ends up being a OneCoin clone, with its business model looking quite similar to it. There's no proof that there's money being made here other than people's investments, and it just has a lot of red flags.

Quick Navigation
Dacxi Review Summary
What is Dacxi?
How To Make Money with Dacxi?
Dacxi Ugly Truths Revealed!
What I Like About Dacxi?
Is Dacxi a Scam?
How I Make a Living Online?

Dacxi is a MLM or multi-level marketing company that promises its members of the possibility of doubling their investment. I would have to say that they belong under the investment niche. 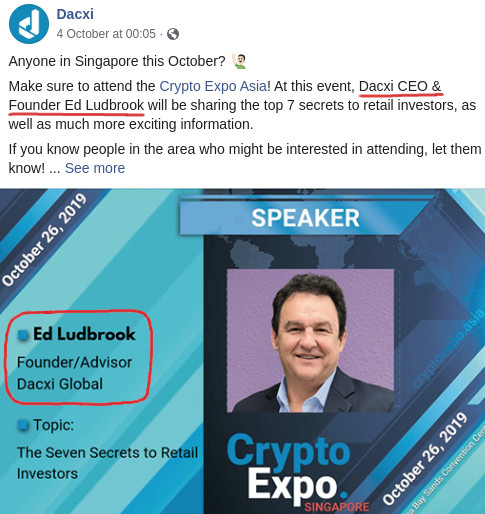 What is Dacxi - Ed Ludbrook

The domain name, dacxi.com, was registered in 2017 under a private registration so there’s no way of telling who registered it and where it’s registered.

The owner information is elusive on the site’s landing page, but a quick Google search and some thorough research led me to Ed Ludbrook as the founder of this company.

Ludbrook has had a shaky history of being involved with Ponzi schemes, primarily because he was the Asia Ambassador of the infamous OneCoin. After this scheme got exposed, the management team and several of its promoters found themselves in legal trouble.

To this date, several key personnel, including Ludbrook, are still dealing with criminal cases due to their involvement with said Ponzi scheme.

Dacxi’s business model is similar to OneCoin, where it promises a fixed ROI depending on how much you invested and how many people you bring in to the business.

But we’ll talk more about their income opportunity in the next few sections.

Their company website does not mention of any products or services for sale, as one might expect from a legitimate MLM company.

Instead, you’re investing into their income opportunity by purchasing a membership into their program.

Take note that there is no investment platform or software to help you generate your ROI. There is no trading involved either.

Members rely on the fact that they’ll be able to withdraw more money than they invested in. Assuming this was a legitimate investment or trading platform, there might’ve been a possibility for that.

However, the only source of income generated by Dacxi is through recruitment. People investing into the income opportunity only end up paying the people above them, and they’d have to recruit others to get their money back.

Dacxi also offers a way for members to reinvest your “earnings” through something called “affiliate buy-back cycle”. The investment you make is turned into their coin called DAC, which is a form of cryptocurrency that they can only use and control.

Using new investment to pay returns on other people makes this a Ponzi scheme. This also ties into securities fraud because they’re not regulated by any financial regulators, and they are not permitted to do so by any financial institution.

How To Make Money with Dacxi?

The only way to make money from Dacxi is through recruiting. As mentioned above, there’s no proof that trades or any form of investing is being done in order to generate your ROI.

How To Get Started with Dacxi?

You’d have to purchase what the company called “bundles”, which are split into different types of cryptocurrencies:

The minimum investment is $100 in DAC to join, which is their internal token that absolutely no value.

You get a commission of about 10% of the funds invested in the bundles by your recruits. You also get a 2.5% commission from the members that your recruits got to sign up.

A direct DAC investment made by personally recruited members nets you a 20% commission, and 5% for the succeeding levels.

All commissions are paid out in DAC tokens.

Members who invest in more than $1000 in bundles are eligible for this bonus. You get awarded a 50% DAC bonus and is held into your account. You get the entire amount if you don’t withdraw the entire thing in 180 days.

Let’s get one thing straight here. The fact that the founder, Ed Ludbrook, has a previous involvement with Ponzi scheme means that he could be up to something. He’s trying to revive a once-dead Ponzi scheme.

In July 2016, he aggressively dismissed any concerns that OneCoin was a Ponzi scheme in any of his marketing events.

When the scheme collapsed, he suddenly changed his tune and told authorities that he was misled by then founder and CEO Ruja Ignatova.

During his entire stint with Dacxi, he went on to grow his investment from 600,000 to 2.5 million.

As of this writing, he has not apologized for his role in misleading innocent OneCoin investors and causing people to lose a lot of money.

Just like OneCoin and its clones, DAC has no value in the market. The value is arbitrary, meaning owners and founder can adjust the value as they see fit. You can’t use the DAC coin anywhere except on the platform.

Dacxi has made it a point to not serve members from various countries such as Belarus, Canada, New Zealand, and USA. 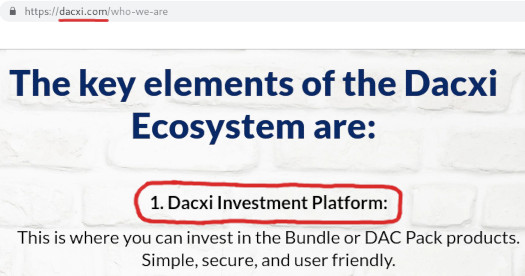 What Is Dacxi - Investment Scheme

This means that they don’t want to be in places where OneCoin was caught, or where there are people that actually keep an eye out for stupid Ponzi schemes.

This just means that Dacxi is operating illegally in several countries with no authorities to scold them for it.

There’s nothing to like about Dacxi, its management, and its entire program. The whole thing just reeks of Ponzi scheme.

Is Dacxi a Scam?

Dacxi is Ludbrook’s attempt at reviving a dead Ponzi scheme from OneCoin. The business models are similar, the offerings are also similar, and the coins are equally worthless. With that said, avoid this program.

We have more than enough reason to conclude that this is a ponzi scheme.

It won’t be long before this program gets caught by authorities, so don’t expect this program to live a long life.