What Is Uhuru Tribe? Exposing This South African Ponzi Scheme!
0 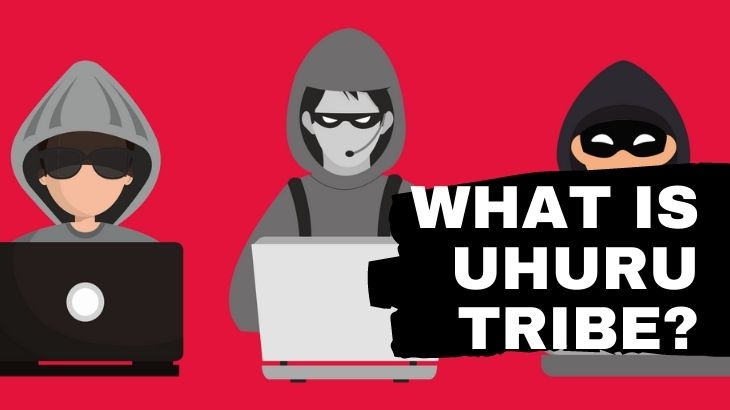 What Is Uhuru Tribe? Exposing This South African Ponzi Scheme!

Welcome to my Uhuru Tribe review!

This is one of the many scams that we’ve seen online, proliferating as much as it can and trying to get as many people to invest.

The sad part is that these programs take advantage of people’s lack of information on cryptocurrency. All they’re promised is a huge ROI for their money, and they cash out as millionaires in a few months. Before long, this scheme would’ve raked in a lot of money and would’ve left their people with no returns.

This scheme is called Uhuru Tribe.

Let me be completely transparent with you, I'm not associated with Uhuru Tribe in any form.

Instead, I'm here to reveal what this Ponzi scheme can do to you... 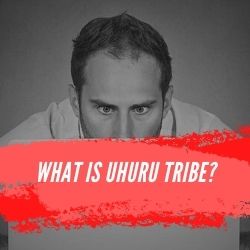 Summary:  Uhuru Tribe is a MLM company that operates in the cryptocurrency niche. It's got a lot of red flags of a Ponzi scheme, and some of them are obvious. But they operate differently than most of the Ponzi's we've reviewed here. We're going to discuss all about it in this article...

What is Uhuru Tribe?

Their landing page alone doesn’t have any useful information that we can use. All we know is that Uhuru Tribe is a MLM or multi-level marketing company that operates under the cryptocurrency and investment niche. 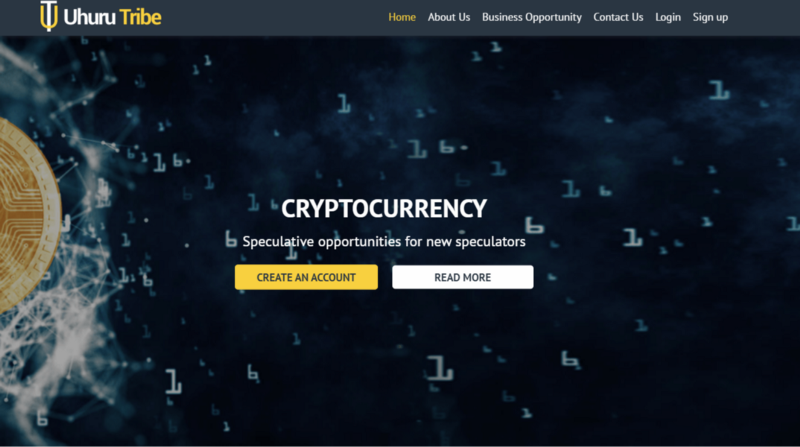 What Is Uhuru Tribe - Landing Page

There’s no information on who operates or who owns the website, but they have one YouTube video talking about their income opportunity. This spokesperson, named Coenraad “Coenie” Botha, talks about the opportunity and can be seen logging on the site using the Admin dashboard.

It’s safe to say that he’s running the show, or at least holds a high position in the income opportunity. His social media accounts state that he’s currently residing in Swakopmund, Namibia. However, Uhuru Tribe’s bank accounts are located in South Africa. It’s unclear as to where they operate, but it’s definitely either of these locations.

What The Heck Is A Stockvel?

On their website, you’ll something they market called a Stokvel, which is defined by Wikipedia as:

“an invitation-only club of 12 or more people serving saving schemes or credit unions in South Africa. Members continue to contribute fixed sums of money to a central fund on a monthly or fortnightly basis”.

What this basically means is that people invest in a coop or union of sorts, expecting a fixed return on their deposit. It may be in the guise of savings, but it’s actually an investment and people are getting into an investment opportunity.

Like most of the MLM companies that reviewed that operated under this niche, Uhuru Tribe doesn’t have any product line or service to avail of. This means that there’s no profit generated by the company other than the money invested by their members.

Are there trades done to generate ROI? No.

Are there products sold? No.

The first iteration of Uhuru Tribe didn’t have anything to do with cryptocurrency. They operated in South African Rand (South Africa’s currency) and used a MLM matrix to pay out commissions. This is a combination of Ponzi and Pyramid Scheme.

Now, Uhuru Tribe takes on cryptocurrency by only paying out in Bitcoin and UHC. UHC or Uhuru Coins points are their own brand of cryptocurrency that’s traded within the program. To get more coins, you’d have to invest real money.

Outside of the company, UHC does not have inherent value and cannot be traded or invested in other platforms.

So what does this mean?

The only source of income that Uhuru Tribe has is through recruitment. If they get people to invest in the program, there will always be funds to pay off members at the higher tier. The top positions will always get a slice of the pie.

Because their business model is fraudulent, they set up this pseudo-compliant statement that goes like this: 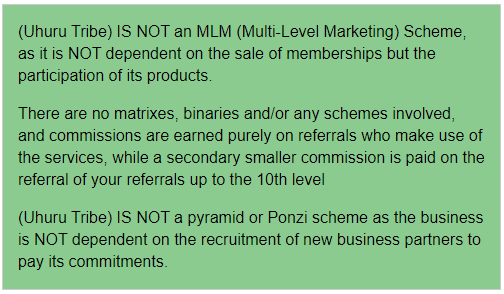 This is a big fat lie. Their commissions and compensation are based on a MLM unilevel compensation structure.

To operate legally, and that means to carry out investments, they need to be registered with the various financial regulators. We couldn’t find any information on their registration, so it’s safe to assume that they’re not.

This makes them liable for securities fraud in the countries they operate.

How To Make Money with Uhuru Tribe?

There’s only one way to make money from Uhuru Tribe and that’s through recruiting people. Your ROI is only based on how many you can recruit into the program.

How To Get Started with Uhuru Tribe?

The membership costs 2.50 UHC and then succeeding months will cost 25 UHC. Their marketing material states that they only accept Bitcoin for payment for these UHC.

Their compensation plan is focused on their investment platforms. These are what they use to convice you that your money is going to grow with them.

Uhuru Tribe only accepts Bitcoin as initial deposit in exchange for UHC points. The current exchange rate is not disclosed on their website. Once UHC is acquired, you can use it to invest in the following plans:

As expected, your returns are paid in UHC.

They pay out residual commissions through a unilevel compensation structure. Your recruits are placed at your first level. Your recruits’ new signups will be placed on your second level, and so on.

You earn a percentage commission based on these levels as follows:

It’s clearly a Ponzi scheme. It doesn’t take a genius to see through their compensation plan. The income that they generate only come from people who sign up for the program.

They don’t have retail products or services, so there’s no profits generated from retail side of things.

There’s no trading being done here, so no profits earned based on margins.

You can also refer to the SEC and FTC’s guidelines for spotting these schemes:

They’re asking you to use valuable cryptocurrency, which is BTC, in exchange for useless coins. Their UHC is practically useless and has no market value outside of Uhuru Tribe. Bitcoin is valued in the thousands in the market, and can be used in any business.

So why would you even trade in your BTC for something so useless?

There’s just nothing to like about Uhuru Tribe. The program’s very fraudulent and the fact that it’s very obvious in its red flags means that only the most gullible people are pulled into investing.

Is Uhuru Tribe a Scam?

Uhuru Tribe is definitely a Ponzi scheme, and there’s enough evidence just by looking at the way their compensation plan and income opportunity work.

Stay away from this program. You could also land some jail time if you promote this program. They’re committing securities fraud for taking in investments without any permission from financial regulators.

HoneyGain Review – Make Money To Rent Out Your Internet?

Is QTRex a Scam? It’s Another Cryptocurrency Cycling Ponzi!