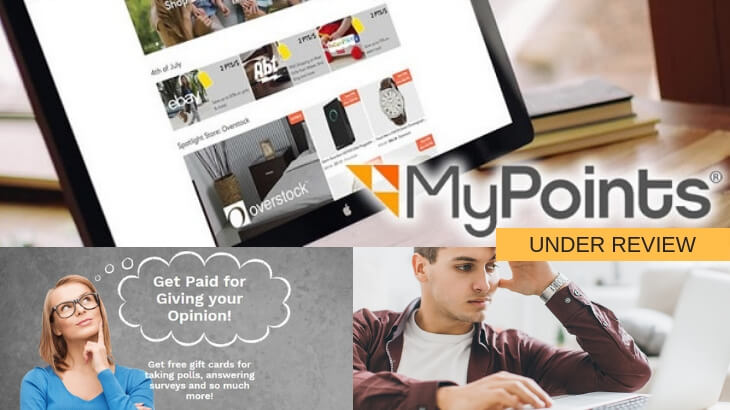 Welcome to my MyPoints review!

This GPT or Get Paid To Rewards site is considered to be the pioneer of all GPT and paid survey intermediaries.

I am referring to MyPoints!

Let me be completely transparent with you, I'm not associated with MyPoints in any form.

Instead, I'm here to reveal a little history about MyPoints and what their program is all about.

So check out my MyPoints review and find out why it's considered as the pioneer of all GPT sites.

Price:  Free to join (US and Canada Residents Only)

Best For:  People who have lots of time to earn a few bucks online. 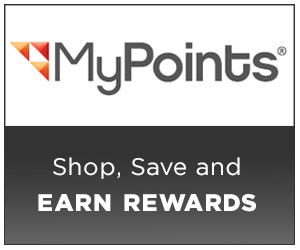 Summary:  MyPoints is a GPT Rewards site that pays you to do what you are already doing online, from taking surveys to watching videos. But this program is quite disappointing despite its credibility, which is why I can't recommend this to anyone for three reasons. First, they have terrible customer service (and I'll show you why). Second, they have issues with points not being credited on time. But what they do with customer complaints about points baffle me, and I will show what I mean in this article. Lastly, the income potential is really low. At least they didn't advertise that it was a "get rich quick" scheme. But what can you expect from any GPT site, right?

Quick Navigation
MyPoints Review Summary
What is MyPoints?
Inside MyPoints
Who's MyPoints For?
MyPoints Ugly Truths Revealed!
What I Like About MyPoints?
Is MyPoints A Scam?
How I Make A Living Online?

MyPoints is a Get Paid To or GPT rewards site that pays you for doing certain tasks, and these are tasks that you often do on a daily basis.

The online rewards site is considered to be a pioneer and a leader amongst other GPT sites like PrizeRebel, InboxDollars, and Level Rewards to name a few.

MyPoints is operating under MyPoints.Com, which is a California-based organization and a branch of United Online Inc. United Online Inc was formed by the merger of NetZero and Juno Online Services.

So, MyPoints is as legitimate as you can get in terms of who’s running the company.

This site is a 100% online rewards platform that doesn’t run on a market research model too, unlike programs like Vindale Research.

And similar to other programs that are mentioned above, MyPoints provides its members with different ways to earn points. 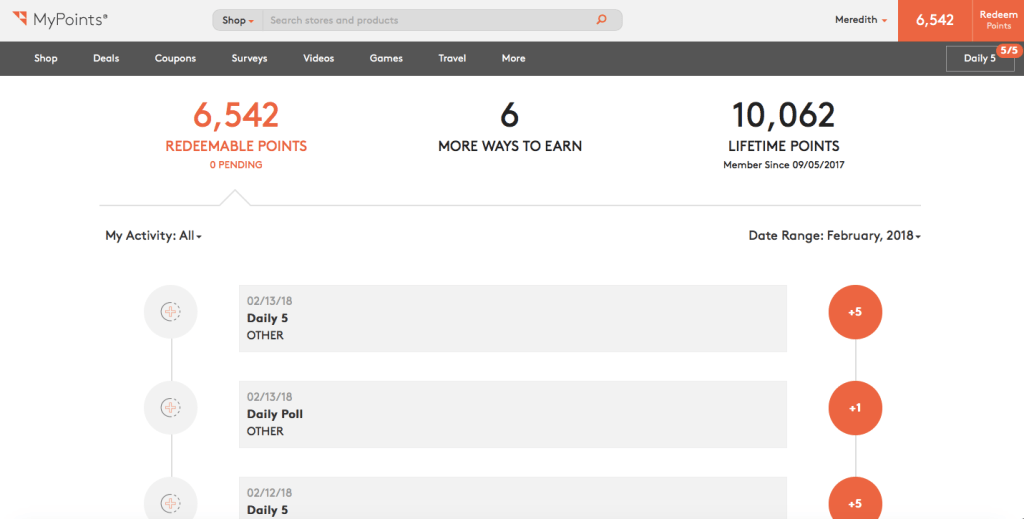 The site also uses a point-conversion system that allows their members to trade in their accumulated points and trade it in for cash or gift cards.

How Much Are Points Actually Worth?

Points are accumulated over time as you complete tasks that are listed below.

How To Make Money With MyPoints?

Through MyPoints, you earn points by doing one of these individual tasks:

The bread and butter of most major GPT sites, participating in surveys from MyPoints also allows you to earn points. After completing a survey, you’ll earn around 50 points or roughly $0.35.

Like most survey programs, members may or may not qualify for some surveys. MyPoints sends you an email containing the link to a survey that you qualify for.

One good thing about MyPoints is that if you are disqualified from a survey, you still get 10 points, so you still get paid whether you complete it or not.

MyPoints sends you email that contain links, where you’ll earn around 5 points once you click on it. It takes about 10 to 15 seconds on average to go through one of these, so it’s not that bad in terms of getting quick daily points.

MyPoints is partnered with popular online shopping sites that allow you to get your cash back at a certain percentage when you shop from their site. You get around 2 points per dollar spent on shopping.

If you’re a fan of shopping online, this is a good way to rake in points, especially now that the holidays are right around the corner.

You can earn points by watching videos and playing games on MyPoints. The points you earn aren’t as high as completing a survey, but this is a great option if you feel burnt out doing the surveys or reading emails.

Every video gives you 1 point, with a daily limit of 10 videos. Each video averages about 3 minutes in length with ads.

Coupons are every grocery shoppers’ favorite, especially ones that can help them save a few bucks. MyPoints, with their extensive partnership with different retail stores, helps you do just that by giving you 10 points every time you print a coupon. That’s about $0.06 cents.

Every now and then MyPoints partners with advertisers to give their members in-store deals. For example, you can purchase two particular items from a particular retailer (like Walmart) as advertised on the site.

When you scan and upload your receipt to MyPoints, you earn around 1,750 points, which is already enough for a $10 gift card.

These deals are rare, so it’s a good idea to get them while you can.

MyPoints has a solid referral program. Members can earn 25 points just by referring somebody, and 750 more points if that person spends $20 or more while shopping and 10% of all the points that person earns.

These points accumulate over time and you can exchange them for gifts cards. The points are about 0.62 cents each, meaning that you will have to accumulate 1600 points to cash out a $10 gift card.

MyPoints gives you two options for cashing out your points.

MyPoints is free to sign up for, and like a lot of survey intermediaries and GPT sites, they’ll ask you to fill out a survey questionnaire for your profile. 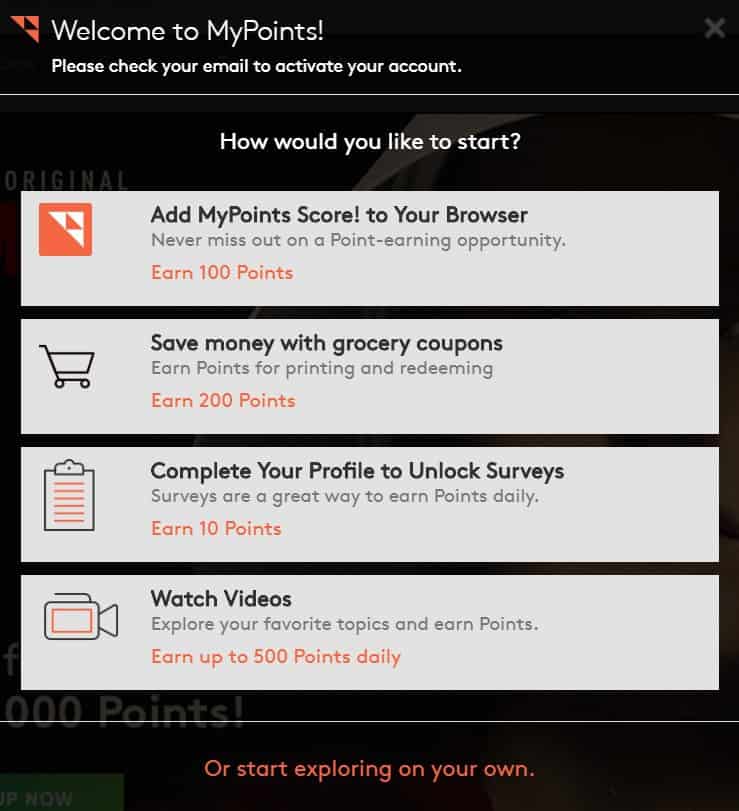 MyPoints is perfect for:

You’d think that a pioneering GPT site like MyPoints would have everything figured out, down to the last service.

Sadly, their customer service, or lack thereof, remains to be appreciated. 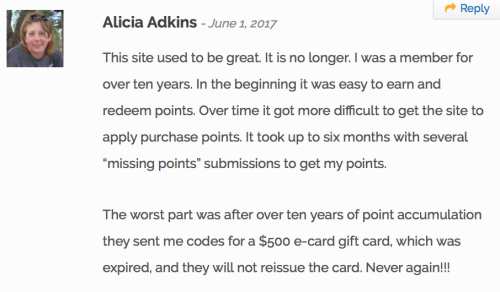 Complaints about being ignored by staff when issues are raised

Folks are reporting certain issues with regards to their accounts but apparently are being ignored by MyPoints staff.

To me, this is just terrible for a company like MyPoints.

By the way the comment reads, it looks to me like MyPoints doesn’t have enough money to afford a customer service department, or they made one and the entire department just doesn’t get paid enough to care.

Either way, this is very ugly for the likes of MyPoints.

#2 – Points Are Not Getting Credited

There are also issues with points not getting credited on time, which seems to be like a normal issue with other GPT sites.

But here’s the kicker though. If you do bring up to the customer service department that your points are not credited on time, you’re accused of being a cheater and your account gets banned. 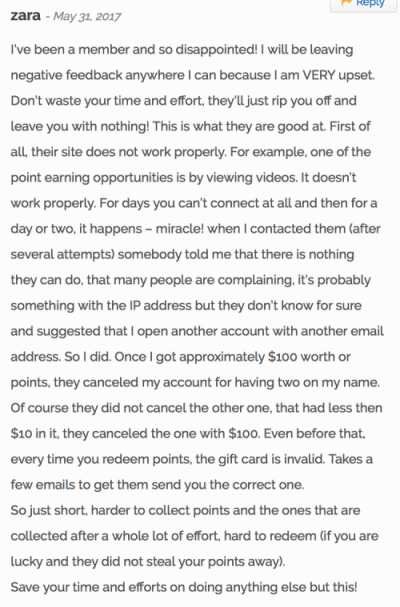 Points not getting credited and getting their account blocked.

This perfectly ties in with my point above: terrible customer service.

Of course, I would like to point out that they have not pointed it out anywhere on their site that their program is a “Get Rich Quick” scheme, so that’s a saving grace.

But then again, you want the program to be worth your while.

Let me show you what I mean.

Now each survey would probably average at 20 minutes tops, so there’s like 3 surveys at least for anyone to do per hour.

Assuming you get qualified surveys, that’s $0.93 per hour.

How many hours do you think it’ll take you to get to the $25 payout?

You’ll need to invest just about 26 hours’ worth of your time, or about 78 surveys, to get to that payout.

But that’s assuming you get those qualified surveys. You’d spend even longer time if you do end up with surveys that disqualify you.

#4 - Available Only To Residents From USA And Canada

This restriction is a big letdown, considering that they do have a lot of options that people from other countries would definitely enjoy.

It's just a big waste that a site like this is not available to people from other countries.

I actually find it fascinating that MyPoints has one of the quickest turnaround times for points and conversion.

While coupons may take up to 90 days to show up in your bank account balance or in your dashboard, completing surveys and other tasks gives you your updated points in a few minutes.

This allows you to get a gift card or cash out through PayPal without having to wait a few days to get credited.

But there is that issue where some points are not credited on time, so this is a hit-or-miss for me.

Filling up surveys can be mundane and time-consuming, but MyPoints gives you other tasks to kill the monotony.

They have at least 7 ways to earn points and they are more than adequate to help you earn enough points for the day without relying on just answering surveys every single day.

If you are, however, looking for a consistent way to earn money online without answering surveys, check out my step-by-step guide on affiliate marketing.

Is MyPoints A Scam?

MyPoints is definitely not a scam as far as I can tell. They’re a legitimate program backed by a multi-million-dollar company.

They claim to be a pioneer in online rewards programs, but that remains to be seen.

But even with their credibility and their different ways to earn points, I can’t recommend this program to anyone, and I’ll give you three reasons.

The first one is that they have terrible customer service. Members should always feel that the company has their best interest in mind, and should have a dedicated department ready to answer their queries.

But MyPoints doesn’t really seem to do that. With the complaints that I’ve posted, it seems that customers are just left on their own to deal with their problems.

But MyPoints doesn’t think so. If customers complain about their points not getting credited on time, they’re branded as a cheater by the customer service reps and their accounts get banned.

This just completely blows my mind the way their customer service department works.

Lastly, the income potential is really low. As I pointed out, it takes a lot of time to get enough points for a $25 cash card from PayPal. But what can you expect from GPT rewards site?

It’s not like they advertised that you could earn a full-time income out of their program, which is their own saving grace.