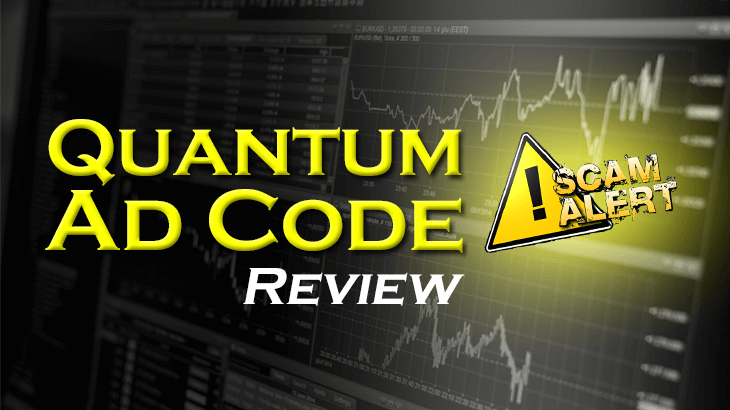 Is Quantum Ad Code a Scam? (Yes, the WORST Scam Ever!)

First of all, Congratulations for taking the time to do your own research before buying into any "seemingly good" products.

Let's don't waste any time and get straight to the point...

Is Quantum Ad Code a scam?

Yes, Quantum Ad Code is a scam. Not only that, it's a total scam product you should definitely stay away from. No questions asked!

If you've been following me, you'll know that I never give my verdict without any evidence.

So if you're interested, in this Quantum Ad Code review, there will be PLENTY of evidence to prove to you that this is an outright scam.

If you don't want to waste any time, just take a look at my top recommendation below...

Best For: The mysterious owner Summary: Quantum Ad Code is a binary options trading scam which has been re-branded multiple times in the past. Other fake product names like Free Ad Cash System, Quantum Code and Ad Profit System are all different sales pages to promote this scam.

What is Quantum Ad Code?

Not only that, everything is FREE and you can make money within minutes WITH LITTLE or NO WORK!

Seriously, if your scam alarm hasn't ring yet, there's something wrong with you.

There's really no shortcut to success and making money online isn't that easy.

Below is the sales video of Quantum Ad Code featuring the alleged founder, Michael Crawford.

The only thing he did in the video was to give you unrealistic income claims and show you some fake income proofs...

Before we dive into the actual system, let's understand some of the important background information about this scam product...

Back in 2016, there was this product called "Quantum Code" also founded by Michael Crawford. It's a scam Forex trading robot. What it did was taking innocent people's money and put them into their "automated trading software" which obviously won't help others make money.

Since a lot of people had been scammed back then, this scam was exposed. But that didn't stop "Michael" from scamming people.

So he started creating many other sales pages to lure people into this scam. That's how websites like Free Ad Cash System, Ad Profit System and Quantum Ad Code were formed.

They all try to hide the fact that the real product is a binary options trading system. For example, Free Ad Cash System claimed that you can make millions by "Flipping Ads" which is a business model that doesn't exist at all.

In other words, the original Quantum Code was re-branded into many different forms to scam people's money.

You want proof? Let me show you in the next section...

Now, here's the most exciting part...

There's no such thing as you can make millions on autopilot just by plugging into some powerful system like what Michael was trying to pitch you.

Below is a proof that Free Ad Cash System and Quantum Ad Code are basically the same thing just with a tiny little difference in the copy: Look at these 2 sales pages!

They are exactly the same and when you try to sign up for Free, you'll be led to a BannerBit check out page where you need to deposit money.

BannerBit is the secret Binary Options system that is sucking in money from innocent people.

Once again, this is another scam product that is using 100% fabricated testimonials.

Below are the exact same testimonial on both Free Ad Cash System and Quantum Ad Code. The only difference is just the name of the product mentioned: This particular photo they're using is actually an award winning director:

A lot of scam products simply use online stock photos to use as their testimonial. I guess they're trying to do it here as well but I think they didn't know they'd actually chosen a person who is an award-winning director. LOL!

I hope she can find out soon and sue them about it. This is really unethical.

"Michael Crawford" claimed himself as the owner of Quantum Code & Quantum Ad Code.

Not only that, he claimed himself as The Wall Street Wizard, The Millionaire Trader and the nicest rich guy in the world!

I really laughed when he said he is the nicest rich guy in the world, LOL!

He even put all the social proof on his video and claimed himself to be featured in places like CNN, Forbes and other Financial Magazine: Let me tell you, these are all fake. If you spend time to do your own research, you'll find out these are not true at all.

The mysterious owner of this product is just trying to take advantage of those people who are too lazy to do their own research.

In fact, I highly suspect this "Michael Crawford" is just a fake name and the person is just an actor.

Because if he is really that rich and successful, he must be easily found online, right? But there's literally nothing online you can find about this person.

Ironically, when I search for "Michael Crawford", the only person showed up is this guy who is a real actor. LOL, such an irony: According to "Michael", almost all of his students using his "secret system" can become a millionaire or multi-millionaire. And you can get started for FREE! I've personally seen a lot of fake and hyped up income claims but this one is the most ridiculous one I've ever seen.

If it's really that easy, we all are millionaires by now.

And the system is definitely not free to use. Once you pass them your personal information, you'll be asked to make a minimum deposit of $250 into their trading system.

This is even worse than investing in a $37 scam product from ClickBank because you're basically throwing away $250 which you'll never get back.

If you've been following me, you know that I always try to be as balanced as possible.

But this product seriously has NO pros to mention.

Other problems about Quantum Ad Code are:

Basically, this is an illegal product. You can sue them if you're able to find the real owner. But it's not worth your time.

Instead, you should be focusing on much better platforms like Wealthy Affiliate to make legitimate money for yourself.

Is Quantum Ad Code a Scam?

Absolutely. No questions asked! Run for your life please...

As you can see, this is just an old scam that has been re-branded again and again to scam more people.

I'm really sick and tired of such programs.

In fact, such scams are quite easy to find out. But they are just taking advantage of those innocent and lazy people who don't do their research.

A Much Better Way to Make Money Online...

Stop dreaming about making big bucks without any hard work. Making money online is not a magic. You won't be able to find a certain secret and start making lots of money online.

A lot of time and hard work is needed if you are serious about making money online and creating the lifestyle of your own design.

My top recommended business model is Affiliate Marketing because it has the potential for you to build your own passive income streams.

That's the kind of income which can enable you to have more time for yourself and your family.

Jerry is a young aspiring Internet Entrepreneur who started his online business at the age of 18. He is currently a Full-time Affiliate Marketer at Wealthy Affiliate, a community to help anyone start their own online business without prior experience. He actually achieved Financial Independence at the young age of 21. Read more about his story here!

From what you’ve said in your review, I can totally see that this is a scam. I mean look at those sales pages, they are identical! And I hate it when they say you can make money for free but then you need to actually invest money, this is a total lie. And what’s more is that they don’t even tell you what the program is about. The way that they are luring poor people who are not familiar with online scams, are by the big numbers and by the way they talk. This guy sure is convincing but you’re right when you say that a little research can go a long way to find out whether a program is a scam. I hope that everybody looking into this program finds your review and don’t fall for this scam only to end up losing their hard earned money.

As always I have enjoyed the time on your website. You do a great work here and I appreciate it. I do believe Quantum Ad Code is a scam. As you have said “run for your life” scam 🙂

Keep up the good work!

All the best,
Ivan

Jerry, please forgive me but when I read the first part of this review, I did not go any further because this program is nothing but a scam. Where on this earth would you find a business model that can help you making this kind of money within days with no experience? And even if you have experience, this is still not possible. They are not only selling a dream but big lies. I can’t believe people would actually buy into this lie. This system is nothing but lies and fake. Thanks again for sharing.