Is QProfit System a Scam? Another Trading Scheme Exposed!
0 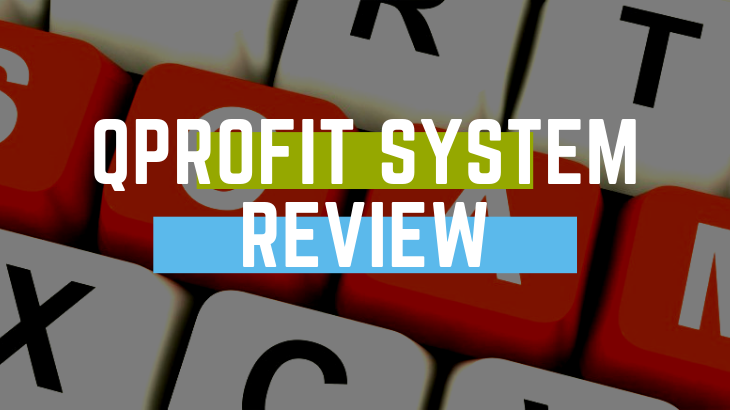 Is QProfit System a Scam? Another Trading Scheme Exposed!

Welcome to my QProfit System review!

Forex trading is an industry that’s riddled with scams and fraudulent schemes that only want to take away people from their hard-earned money. The reason why they have a lot of scams is because it’s a specialized niche.

You see, not a lot of people know about how this industry works, which is why scammers take advantage of the entire situation. Unlike affiliate marketing, you have to be a licensed broker to be able to provide trading services for others.

Let me be completely transparent with you, I'm not associated with QProfit System in any form.

Instead, I'm here to reveal what this trading scheme is not telling you and why it's a complete scam! 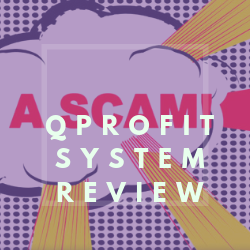 Summary:  QProfit System is a Forex trading system that claims it can get you 90% accuracy at predicting the market through their supposed new-age system. However, a lot of what they say is complete BS because this program is a scam. The fake testimonials and the absence of owner information are just two of the red flags we uncovered in this review.

What is QProfit System?

Q Profit System is a system that claims to provide you with a free automated Forex and CFD Trading system that could let you sign up, deposit funds, and start churning thousands of dollars without doing anything. 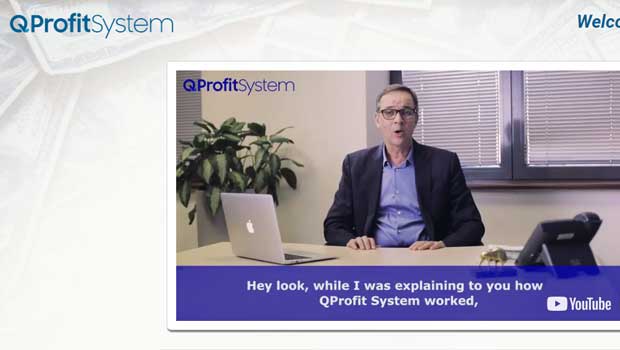 It’s created by a supposed trader named Jerry Douglas, who claims that he’s a high-technology guru who’s been featured in several publications, but somehow, I couldn’t find any article that did feature him (outside of Q Profit System).

Jerry, the mystery tech guru behind the system, says that he’s looking for the next millionaire and he says that it could be you. Doubtful. 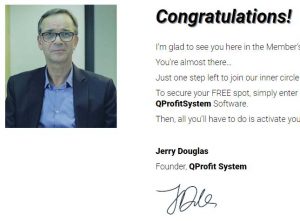 In the sales video, he goes into detail about how QProfit System works and how it uses Quantum-speed technology which allows it to predict future market movements and thereby guaranteeing profitable trades with 90% accuracy.

He also throws in a lot of other mumbo-jumbo BS to make it sound like the system is actually legitimate and that it works.

However, I found out that the system doesn’t really do what it promises to do because it’s merely another scam that takes advantage of uninformed people.

Jerry Douglas explains that the system does the trading for you, and because it runs on Quantum-speed technology (as he says), it’s able to predict the market with more than 90% accuracy.

QProfit System is nothing more than a funnel to trick people like you into signing up and depositing into their trading account. By the time you realize what the program actually is, you’re not getting your money back.

And this is what the program wants you to think.

And none of them appear to be complied with by QProfit System.

Signing Up And Depositing With QPRofit System

You can register for an account with QProfit System for free on their website. You’ll then be taken to their member’s area where you’ll be greeted by Jerry through his sales video.

Then after signing up you’ll be prompted to make your initial deposit by directing you to a broker’s site. A minimum of $250 is needed to get started with the broker’s site and with QProfit System.

You can make your deposit via credit card, debit card, and Bitcoin.

Once you’ve made your deposit, you’ll just have to click on the Start Auto-Trade button because it’s an automated trading platform.

Trading looks fine and all, but I doubt that the system is actually making an impact on the market. I think the platform is all smokes and mirrors and makes you think that it’s working.

Then there’s the issue of people not being able to withdraw their money, or their profits. The trader just ignores the withdrawal, or declines it. One third-party review who signed up for the program reported that they attempted to withdraw their funds, but got no response after repeated attempts.

I know my way around making money online to figure out that scams such as QProfit System are money traps for the uninformed. These are all designed to take away hard-earned money by making false claims to sell their program.

The only reason why this scam is so effective is because it tricks you into “trying it out” and then by the time you want to get your money back, it’s already too late.

If this was a legitimate trading platform and their licensed brokers didn’t give you their money, then they’d be liable for legal actions. Forex trading is that serious.

Who's QProfit System For?

QProfit System is an obvious scam, and makes Forex trading looks bad. The program is not meant for anyone.

Credits to Binary Signals Dream for the image.

QProfit System uses fake testimonials on their site to make it look like the members who signed up are making money. 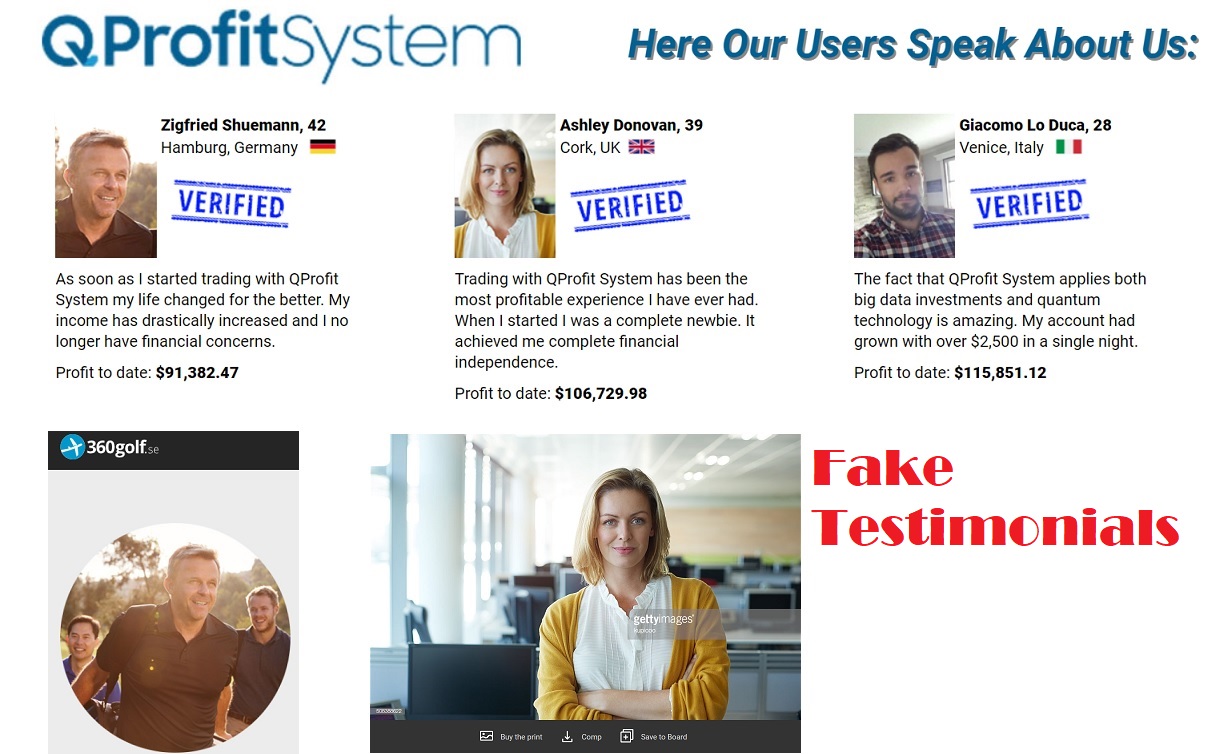 The reviews written by the members are fake, and the photos are also nothing more than stock photos. Frankly, it’s easy to spot the lies here because one review even mentioned that they made $100,000 in a short period of time.

Any legitimate trading platform will not promise you any claims of income, but rather, warn you about the potential risks involved in trading instead. That’s the biggest difference between a legitimate platform and a scam.

One of the ways that the program tries to get you into signing up is to make you think that you get a “Free Spot”.

This is a common trick amongst scammers because they are banking on false scarcity to make the system more enticing. They’re making you think that slots are running out, so you have to get the slot before it runs out.

QProfit System banks on urgency to put pressure on you to buy and deposit on impulse. And when everything is said and done, it will be too late to realize that you’re never going to get your money back.

#3 - No Information About Owner

Nobody knows anything about Jerry Douglas, the founder of QProfit System. He claims that a lot of publications have written about him, but I couldn’t find any traces of those articles.

We also couldn’t find any information about Jerry Douglas that doesn’t have anything to do with QProfit System. There’s no digital footprint, there’s no social media profile. It’s like he doesn’t exist at all.

And that’s probably the reason why Jerry Douglas is just the face of QProfit System. He’s probably only an actor from another content marketplace site where you could get paid actors to do videos.

There’s nothing about the program that I like. This is an obvious scam from the get-go and there’s nothing good that could ever come out of this program.

Is QProfit System a Scam?

Yes, I believe that QProfit System is a scam, and I have to agree with what other people are saying about the program as well.