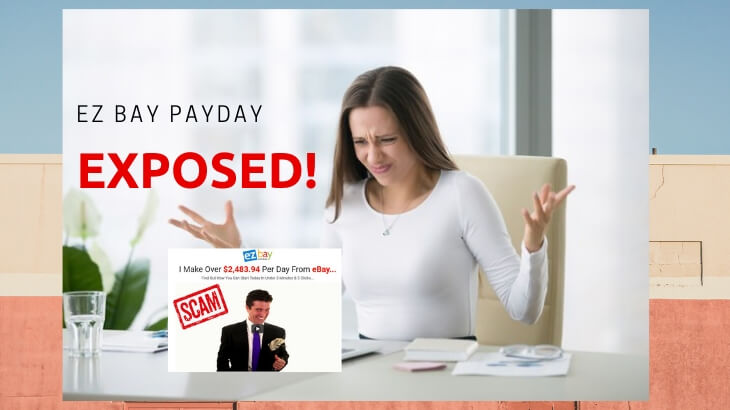 Someone told me about a money-making system that has something to do with Ebay about a week ago.

I had forgotten all about it till another person told me about the same system just yesterday evening.

Curious, I checked out the system and wrote this review.

This is EZ Bay Payday!

Let me be completely transparent with you, I'm not associated with EZ Bay Payday in any form.

Instead, I'm here to reveal why this program is nothing short of illegitimate and why I would think that it's a big scam. 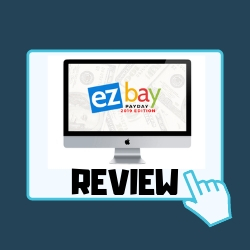 Summary:  EZ Bay Payday is an affiliate marketing platform that promises that you can make $500 per day via eBay. Now unless you're selling your own products or a member of their affiliate program, you'll find that this claim is absolutely ridiculous! Just like your typical scams, EZ Bay Payday makes use of fake testimonials and hides behind a fake owner, so people don't have any idea on who's running the system.

What is EZ Bay Payday?

EZ Bay Payday is a system that promises that you can make $500 or more per day using eBay.

In their sales video, they’re not exactly showing you how you’re going to do that, other than mentioning eBay.

So I assume that you’re going to be selling something from that site. 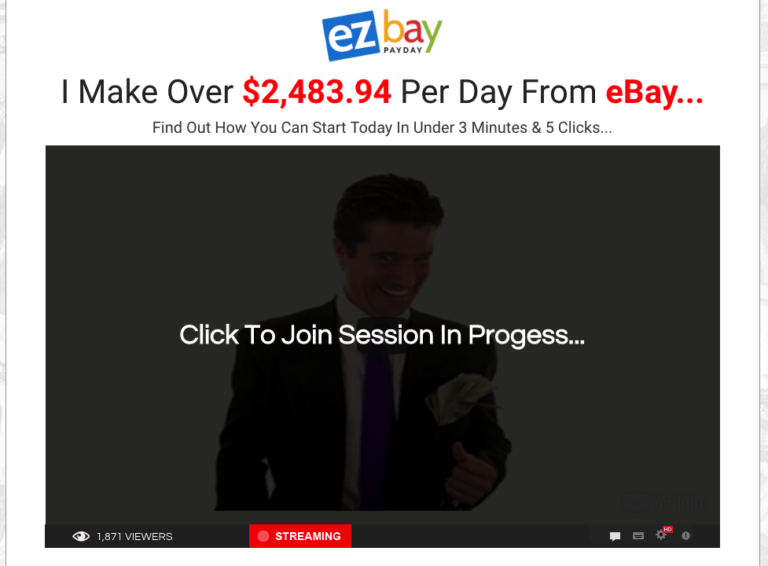 And to my knowledge, eBay has a program for affiliate marketers, but I doubt that the system taps into this.

If you think that this program sounds sketchy, then your gut instinct is probably telling you something.

EZ Bay Payday, and other programs of similar nature, want to make you believe that it’s easy to make money online.

Everything that the site has promised you up to the last part of the sales video is nothing but hype.

Who Is The Owner of EZ Bay Payday?

The owner of the program is named Steve Richards. But in a disclaimer found at the bottom of their sales page, it states that the name used in the video is nothing but a pen name.

So there’s no ACTUAL information on who’s running the program.

This is the first of many red flags.

As mentioned earlier, EZ Bay Payday’s angle is to sell you a money-making program that taps into eBay.

Unless you’re selling your own products or signed up for their affiliate program, this angle is completely BS.

Allow me to rant for a minute because EZ Bay Payday, and other programs, are just laughable by the way they’re marketing their programs.

And all of these claims are backed by nothing but even more hype.

Are you getting something useful out of EZ Bay Payday?

I’m pretty sure the answer is NO.

The Truth About EZ Bay Payday

EZ Bay Payday doesn’t work as advertised (no surprises there) because there’s no legitimate system that can make you hundreds of dollars per day.

The system just requires you to do the following steps:

That’s all there is to it. EZ Bay Payday presents itself as a magical system that you can connect to eBay in order to earn some money?

There’s no mention of what else is included if you sign up for their system.

And this is another red flag!

How Much Does It Cost To Join The Program?

To get into the program, you only need to pay a one-time fee of $37. Now, it seems cheap and you’re thinking that’s not a lot of money to lose if ever you do get scammed.

What you don’t know is that the $37 is just the tip of the iceberg. 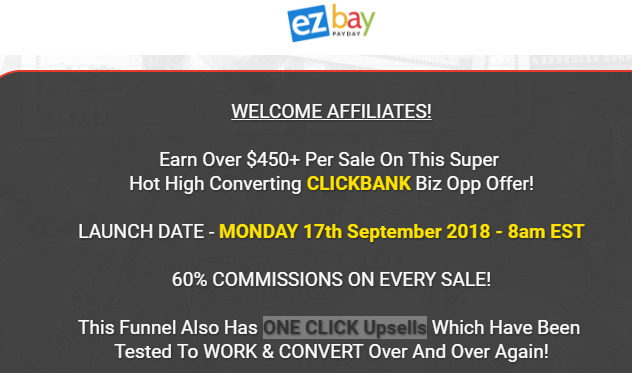 Once you buy into the program (please don’t), you’re going to be greeted with upsells.

And these upsells are not going to help you either.

Chances are, the upsells are going to be a bunch of ClickBank products that the people behind EZ Bay Payday are affiliated with.

Who's EZ Bay Payday For?

This program is not meant for anyone at all.

On top of this program probably being a scam, or up to no good, you’re not getting anything decent out of them.

If you’re looking for a way to make money online but don’t know where to get started, I would invite you to check out my step-by-step guide on affiliate marketing.

It’s free and it won’t ask you for your email and you don’t have to sign up for anything.

One of the biggest red flags that I look out for is the use of fake testimonials.

Fake testimonials are a way for programs like EZ Bay Payday to make it look like there are actually people that succeeded in using their system.

In this case and in all of the programs that I’ve reviewed that are similar to EZ Bay Payday, these testimonials are 100% fake.

EZ Bay Payday shows you two people who claimed to have made tons of money with the system. To those new to the industry, you’ll probably take their word for it.

And I can’t blame you. The testimonials attempt to hit the spot by giving you a sob story of how they turned their life around after: 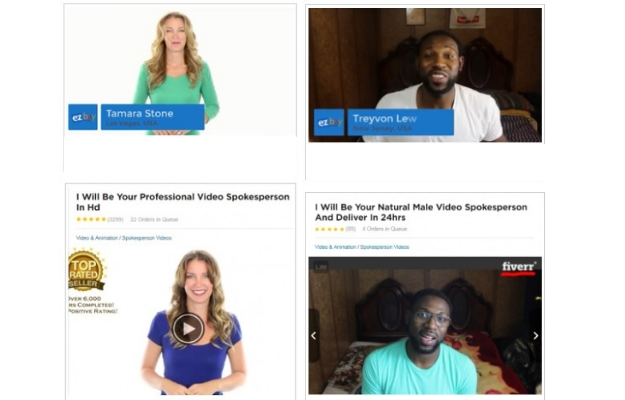 The people who are bringing you the testimonials for EZ Bay Payday’s program are actually paid actors from a site called Fiverr, a freelance content provider.

Unless the site has something to do with narratives or stories, every time an excuse to use a pen name comes up, they’re probably hiding something.

And for Steve Richards, he’s not actually real.

In one of the sales video, he showed a picture of one of his friends having a good time somewhere without him because he’s stuck in his day job. 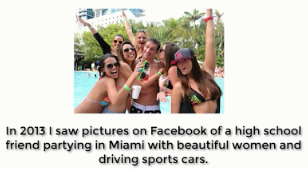 Friends who partied without Steve

But when you search the image on Google, you’ll find that his sob story is nothing more than a stock photo. 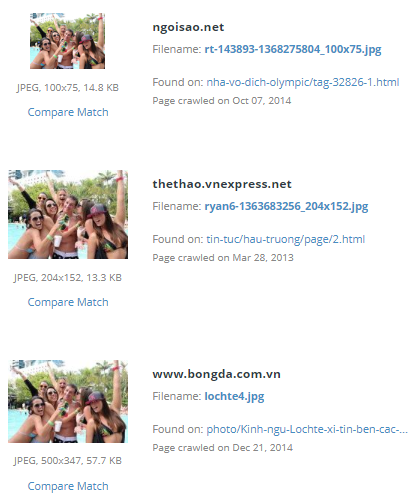 And don’t forget, there’s no other information about Steve Richards ANYWHERE on the site or anywhere on the Internet (except for being associated with EZ Bay Payday).

EZ Bay Payday is a done-for-you system, which is no different from sites that I’ve reviewed such as:

Now these systems aim to give you the idea of automation, when in fact, there’s nothing automated about everything that they will do for you.

The idea of automation from their part is that you sign up, pay for the program, and you’re ready to get rolling.

Whether or not you’re going to pursue e-commerce or affiliate marketing, you should still know that there’s nothing good that can come out of these done-for-you systems in both short-term and long-term.

When EZ Bay Payday gets unraveled by sites like ours, they’re still going to do the same thing to a different group of people.

Because people will fall for it.

And here’s the cycle:

There’s nothing positive worth mentioning about a site like EZ Bay Payday.

I’ve reviewed a number of other programs of the same nature, and they’re not going to give you any real value for your time and money.

Is EZ Bay Payday a Scam?

EZ Bay Payday is a ridiculous money-making system that claims that you can earn $500 per day by doing 20 minutes of work.

And let me tell you that’s a load of BS.

On top of using fake testimonials to lure you into the system, there’s no reliable information about who’s running the system.

Both are huge red flags that warn you that there’s nothing legitimate about the system.

EZ Bay Payday, and the hundreds of other done-for-you systems, promises you a model that will not work in both short and long-term periods.

There are better programs out there that can get you started on affiliate marketing and e-commerce, and EZ Bay Payday is not one of them.